With each season that comes up in the Ontario short tracks, there is always a list of drivers that everyone is keeping an eye on with each other division, wondering how they’re going to perform. The Super Stocks are no different, as evident by the success and strength of the Qwick Wick Super Stock Series since launched.

There are a bunch of drivers who are capable of winning, but here are 34 drivers that are on the radar of people across the province. 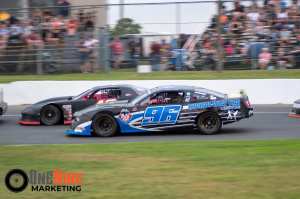 A cheerleader for the division, Donovan Price is always one of the first drivers to speak of traveling and supporting each of the tracks across the province. Behind the wheel, he has seen some solid runs at his home track of Peterborough Speedway.

If you were watching the Qwick Wick Super Stock Series event from Delaware Speedway, you know Nic Ramsay has the speed to challenge despite being new to division. While still snagging Bone Stock wins across the province, he scored three top-10’s including a season-best fourth on the Qwick Wick tour in his rookie campaign.

Capping off the year with a heat victory at Sunset Speedway, Paul Pepper scored a pair of top-10’s on the tour this past season. A lot of eyes have been keeping a close eye on the No. 29, though, following podiums in 2020 at Jukasa Motor Speedway and Flamboro Speedway.

A multi-time champion at Peterborough Speedway, Anthony DiBello has proven to have his program exactly where it needs to be. More victories in 2022 should be in the cards.

2022 Plans: My plans for this upcoming season is to race the full schedule at Flamboro and a few APC races this year as well
2022 Goals: To just keep on improving ever race and keep pushing myself to be better week in and week out
Drivers to Watch: Justin Collison, Carson Nagy, Lane Zardo, Brandon McFerran, Gerrit Tiemersma
Most Memorable / Biggest Moment: It been pretty tough sledding so far in my career, but I would have to say the most memorable moment so far is just being able to spend time with my family around the race track. Hopefully next year when I get asked this question, I can have a whole lot more memories.

A regular at Flamboro Speedway, Austin Penney scored five top-10’s in 2021, highlighted by a fourth on opening night. It’d certainly be a big story if he could hold a checkered flag in 2022.

2022 Plans: Simple – go after the hardware.
2022 Goals: I plan on going out and trying to improve each and every race. Our biggest goal is to get feature win and hopefully a championship.
Drivers to Watch: Lane Zardo, Gerrit Tiemersma, Tyler Hawn, Dan Archibald, and Johnny Morrison.
Most Memorable Moment: Finishing 3rd in a feature and running up front a couple weeks later in 2018. Also, getting Rookie of the Year in 2013.

The No. 82 has not been on-track as much as hoped the past couple years, but you cannot count Nick Tooley out of the equation. In his most recent appearances behind the wheel, the progress was being made to put him into the top-five regularly.

In his rookie campaign at Peterborough Speedway, Jeremy Dobb worked at finding his groove a little more each week in 2021 en route to placing ninth in the standings. 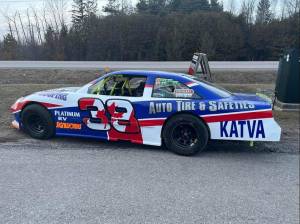 2022 Plans: Qwick Wick Super Stock Series, and run for local championship points
2022 Goals: I’d like to top-five at least five times in feature and win at least one heat
Drivers to Watch: Lane Zardo, Mark Gordon, Paul Boundy, Dan Archibald, and Carson Nagy. All these guys can win at any track.
Most Memorable Moment: So far no huge moments but can’t wait to interact with fans again.

After racing Late Models and Legends last season, Brandon Feeney has purchased a super stock for the 2022 campaign. Knowing the pedigree of the car and his wide experience behind the wheel, it could be prove to be a competitive combination.

2022 Plans: To not miss one race at Peterborough
2022 Goals: Finish top-five or better in points
Drivers to Watch: Not sure about five drivers to watch as I don’t follow Qwick Wick Super Stock Series; I think that class is ridiculous. At Peterborough, Marlie Owen and Paul Boundy will be fast
Most Memorable Moment: Probably rookie of the year at Kawartha, but most memorable is having Dynamite Dave Taylor drive my car and be a part of my crew.

A regular at Peterborough Speedway, Jeffrey Remington just missed placing in the top-10 in 2021 of the final standings despite showing speed throughout the season from top to bottom.

2022 Plans: Run the Sunset Speedway schedule and maybe a couple Qwick Wick races
2022 Goals: Even though last year was a disaster with the new car, this year I have new goals and expectations. I plan on competing for wins on a regular basis and keeping the car clean. Tore the car up last year and never got it right, so avoiding that this year will be huge.
Drivers to Watch: Lane Zardo, Gerrit Tiemersma, Ethan Constable, Dan Archibald, Matt Bentley
Most Memorable Moment: Climbing out of the car in victory lane in 2018 for my first feature win. Been close so many times and this year I want to start the chapter I’ve been waiting a long time to write 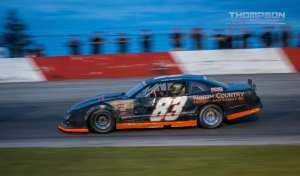 Despite failing to place inside the top-10 for a Qwick Wick Super Stock Series event, Johnny Morrison showed speed at his home track with a pair of podiums at Sunset Speedway. A lot of people are not wondering when he will get his next career win, but just wondering when it will happen.

A multi-time OSCAAR Hot Rod Champion and past Super Late Model competitor, Tyler Hawn brings a loathe of experience to the table as he joins the Qwick Wick Super Stock Series in 2022. He will also have the right equipment underneath him with a knowledgeable crew putting in the work behind the scenes to have him ready for this year.

Continuing to get faster with each season behind the wheel, Ethan Constable showed his ability as a driver at Frostoberfest in battling Shawn Chenoweth, Gerrit Tiemersma, and Lane Zardo for the top spot throughout the 50-lap feature. Few drivers can say they have finished on the podium for Qwick Wick Super Stock event, but that was an accomplishment Constable repeated on three occasions in 2021. There was also the top-10 (eighth) at Sunset Speedway mid-season, too.