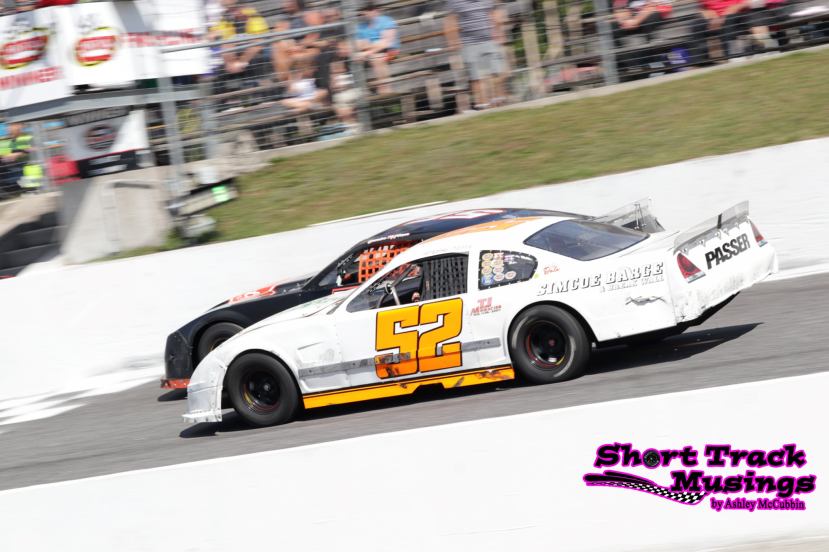 With each season that comes up in the Ontario short tracks, there is always a list of drivers that everyone is keeping an eye on with each other division, wondering how they’re going to perform. The Super Stocks are no different, as evident by the success and strength of the Qwick Wick Super Stock Series since launched.

There are a bunch of drivers who are capable of winning, but here are 34 drivers that are on the radar of people across the province.

2022 Plans: Not good. Not sure if I’m coming across any sponsors to help with the budget.
2022 Goals and Expectations: Maybe make it out for a couple special events and see where we stack up.
Drivers to Watch: Miles Tyson, J.R. Fitzpatrick, Carson Nagy, Lane Zardo, Trevor Collver
Most Memorable Moment: Last year when I was leading the feature and pulling away from lane and coming to the white flag my distributor broke. It cost me the championship for the home points at Sunset. It was truly a humbling moment realizing that everything can be going perfect and yet still something still go wrong so close to the end and break your heart. Specially with the lack of funding and still being able to top the best of the best.

Every time the No. 21 hits the track, Matt Bentley proves he can be one of the drivers to watch and perform at the front. He scored four top-five’s and six top-10’s, including a victory in a weekly Sunset Speedway competition.

2022 Plans/Goals: Try to redeem ourselves from falling short by a couple points for the championship; rallied back from a DNS at the start of the year to fall short on the last night after gaining the points lead going in. It was bitter sweet for the team, but Carson deserved the championship; he was tough competition all year long. Also, compete on the Qwick Wick United Super Stock tour. We had a few good runs going last year and ended up with unfortunate circumstances in the closing laps of a few races.
Drivers to Watch: Shawn Chenoweth, Lane Zardo, Trevor Collver and a few wild cards I think you can’t throw out of the mix to quick are Andrew Ferrira and Brandon Verhoven.
Most memorable Moment: The frostoberfest of the week my grandpa passed, being a rookie and not running much full time, finishing fifth and second in the features that weekend and being able to tie for the overall with my dad. Unfortunately getting second cause of the tie breaker (beating me in the first feature) is definitely on the top of the rector scale for a bitter sweet moment and proud moment for the family under the circumstances.

As Justin Collison mentioned, he was almost your 2021 Flamboro Speedway Champion with five wins, nine top-five’s, and 10 top-10’s. It’s just perfecting the traveling gig after posting an average finish of 13.8 on the Qwick Wick Super Stock tour.

2022 Plans/Goals: We plan to race for a Qwick Wick Series Championship in 2022 and collect the most checkered flags in the division. Anything less will be a disappointment. Our team had a great 2021 season and are continuing to build on that success through the winter.
Drivers to Watch: Lane Zardo, Miles Tyson, Shawn Chenoweth and Carson Nagy
Most Memorable Moment: Either our 2019 Velocity win at Sunset speedway, or our 2021 Qwick Wick Series win at Flamboro Speedway. Both races we led the most laps and controlled the race; hopefully we get to do more of that this year!

After breaking out with the Velocity win in 2019, Gerrit Tiemersma has been one of the fastest drivers from around the province ever since. He proved himself against the top competitors in the province in 2022 with four top-five’s, including a victory in Qwick Wick Super Stock competition. He also scored a top-five and three top-10’s in weekly battles at Sunset Speedway, and a victory at Flamboro Speedway.

2021 Sunset Speedway Track Champion is also that needs to be said to understand why Brandon Passer is on this list. The third-generation racer has been fast over the past couple years, and scored five top-five’s and seven top-10’s, including a win this past season en route to the title. It would be interesting to see what he could do traveling around the province on the Qwick Wick Super Stock Tour.

2021 Delaware Speedway Champion makes the cut as battling against some of the biggest faces in the province and being able to come out on top is certainly worthy. Ultimately, he scored five top-five’s and seven top-10’s including a victory en route to the glory. He also scored a second and fifth in the pair of Delaware Speedway Qwick Wick Super Stock tour events. What can he do outside of his own track? That remains to be seen.

2022 Plans: TCM will be running full time in the Delaware Super Stock Series and the Qwick Wick Super Stock Series.
2022 Goals: We are hoping to do 1 better then last year. After two second-place championship finishes in 2021, we look for redemption in 2022 eyeing both Super stock titles.
Drivers to Watch: Lane Zardo, Branden Verhoeven, Carson Nagy, Pete Vanderwyst and Shawn Chenoweth.
Most Memorable Moment: Winning the inaugural Qwick Wick Super Stock race at Delaware with over 40 cars qualifying for the race last year was pretty cool!

Trevor Collver got to play the role of the bridesmaid, twice, but showed why he’s someone everyone knows will be in the mix of a battle for the win. He scored three victories and five top-five’s weekly at Delaware Speedway, alongside four top-10’s including a win on the Qwick Wick Super Stock tour. Redemption could easily be served for him in 2022 as the No. 1 is always fast.

So who are the top-two drivers? Gonna make you wait a little longer to find out.