Taking the early lead, Miles Tyson drove away from the field en route to a dominating Ontario Legends Series victory.

The second qualifier did not start off strongly, with Wesley Cuthbertson going around the first lap. Jeff Forsey would then loops it off the corner on Lap 5, but was able to get it back the right away and keep going. Adam Cuthbertson scored the victory ahead of Parker Traves, Forsey, Glen Morris, Wesley Cuthbertson, Brandon Feeney, and Wendy Adams.

Miles Tyson grabbed the early advantage ahead of Joe Adams, Adam Cuthbertson, Parker Traves, Kenny McNicol, Shane Pollock, Jeff Forsey, Wesley Cuthbertson, and Glen Morris. The field would get into lap traffic early, with Adams getting caught behind Wendy Adams on Lap 6. This allowed Traves to move into second ahead of Cuthbertson, and McNicol and Adams.

The first caution came out shortly thereafter on Lap 9 for Morris going around by himself in turn two. With 28 laps to go, Tyson led Traves, Cuthbertson, McNicol, Adams, Pollock, Wesley Cuthbertson, Forsey, Massey, and Dunn. 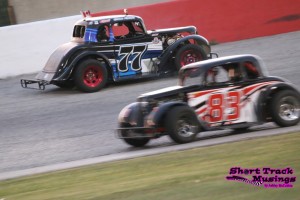 The smooth run through the laps hit a snag with the second caution on Lap 16 for Traves going around. Under the caution, Massey headed pit side, done for the event.