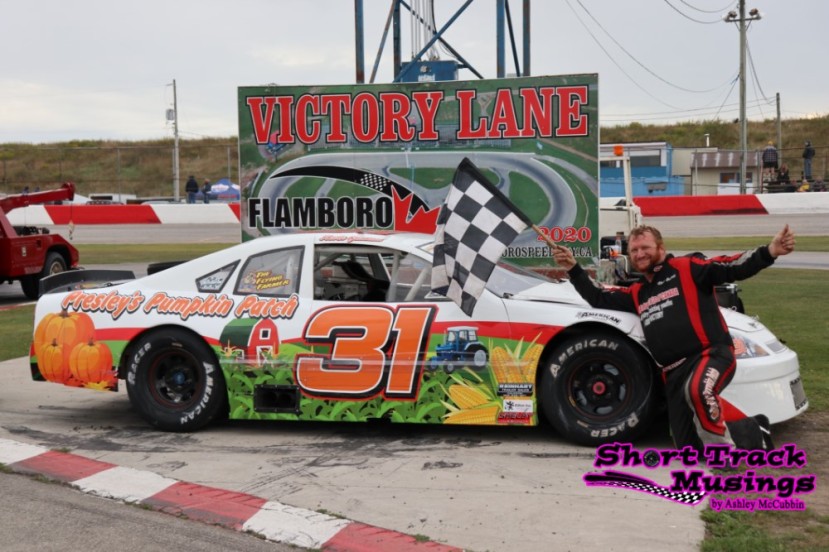 Close battling throughout would produce some great racing, with Kevin Gallant and Ken Grubb splitting the feature wins. 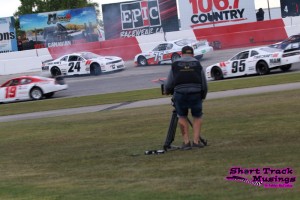 The action started right from the drop of the green flag with Robblee and Lay going around in the first corner.

The second attempt to start the event was clean, with Collison and Shawn McGlynn side-by-side for the lead ahead of Grubb. Collison got the top spot on Lap 2 ahead of Grubb, with Gallant alongside McGlynn. Gallant took over third a lap later ahead of McGlynn, Corcoran, Tiemersma, Hryniuk Jr., Trevelin, Brent Wheller, Burke, and Lay.

The green flag wouldn’t last, though, with the second caution on Lap 8 for Robblee going around in turn three and four. Under the yellow flag, McGlynn gave up the fourth spot to head to the pits.

Collision got a good restart with Gallant up to second ahead of Grubb. Gallant would not let Collison get far away, looking underneath the leader for the top spot. There’d be contact with Collison coming down a little, going around in turn four for the third caution at Lap 9.

Gallant restarted the leader now ahead of Grubb with Corcoran up to third ahead of Tiemersma, Chad McGlynn, and Brent Wheller. Tiemersma got sideways off of turn three on Lap 13, allotting McGlynn move up into fourth ahead of Wheller, with Tiemersma now sixth ahead of Hryniuk, Collison, Burke, and Trevelin.

McGlynn would look to challenge Corcoran for third, with contact between the pair, allotting Wheller to get a run to the inside of both down the backstretch. Now three-wide, there’d be more contact with Wheller going around for the fourth caution on Lap 11. 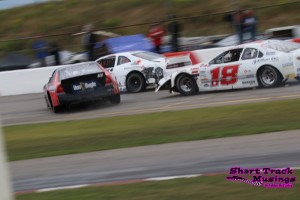 The restart would see McGlynn get loose off of turn four, getting into the frontstretch wall. Additional contact in the process from Hryniuk would get McGlynn further up the wall, resulting in the No. 18 going up on his side, riding the wall, before rolling over upside down entering turn one. Thankfully, McGlynn was uninjured in the crash.

Gallant got a good restart holding serve ahead of Grubb and Corcoran, with Collison back up to fourth ahead of Tiemersma, as Burke and Trevelin battled for sixth. Burke got sixth on Lap 21 ahead of Trevelin, Lay, Wheller, Robblee, and Hryniuk, as Shawn McGlynn headed to the pits on Lap 23.

The race appeared to have a green flag appearance with everybody running fairly clean through the field. However that hit a snag when Tiemersma made contact with Corcoran on Lap 12 off of turn two, resulting in both drivers going around for the caution.

Grubb got a good restart with Brent Wheller moving up into second ahead of Colliison as Gallant fell back to fourth ahead of Burke, McGlynn, and Trevelin. Wheller’s strong run came to an end on Lap 16, as he’d go around off of the corner, collecting Trevelin in the process. 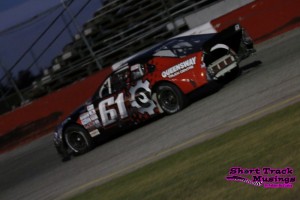 The restart would see Collison break sideways allowing Grubb to get away as Gallant moved back into second with Collison back to third. McGlynn now ran fourth ahead of Tiemersma, Burke, Hryniuk and Corcoran, as Wheller and Robblee battled for ninth. Wheller got the spot on Lap 20, passing Hryniuk a couple laps later. Corcoran also continued his climb back through the field, passing Burke for sixth on Lap 26.

Although Gallant was able to run down Grubb for the lead and make a couple peaks inside, he was unable to totally get alongside. Ken Grubb, therefore, led the rest of the way en route to checkered ahead of Kevin Gallant, with Shawn McGlynn making the late pass on Brad Collison for third. 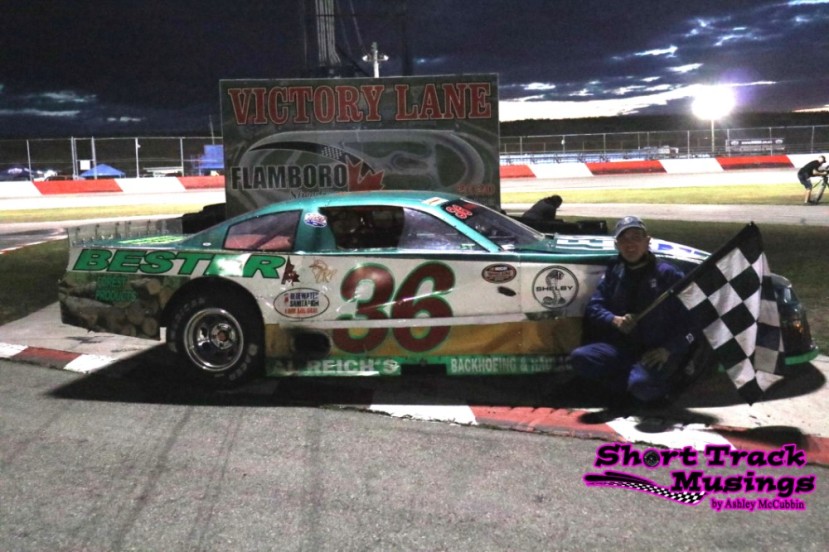