The Pure Stocks have always been a competitive class at Flamboro Speedway, and 2020 has been no different. The pair of events thus far for the division have seen two winners, with Kris Khan and Gillian Hils each taking honors in those events.

With 45 challengers from across the province geared up to compete, Saturday’s event could easily produce a third different winner.

Austyn Jennett is hoping for a clean day of racing, as mechanical issues and on-track contact has prevented him from running the main feature in both previous events.

Andrew Shilling will be hoping to score a top-10 this time around at Flamboro, after just missing the cut with an 11th in the first event this season.

Andy Wheller has always ran up front at Flamboro through the years, and has been part of the conversation the past two races to continue the trend. After qualifying inside the top-five for the first event, mechanical issues took him out of the first race, while a wreck took him out of contention in the second.

Ang Novis had a day to forget at the last Flamboro event, battling mechanical issues all day long en route to missing the feature. The team hopes to have those problems fixed heading into this weekend.

Bobby Mercer has visited victory lane previously at Flamboro, something he hopes to make happen on Saturday after finishes of 15th and eighth in the previous pair of events.

Brian Gamble was fast enough to qualify for the feature the last time around, but in both trips, bad luck has plagued him resulting in finishes outside of the top-20. Certainly if this is his last start behind the wheel with intentions on selling the car, he will be hoping to end things on a better note.

Coltin Everingham has a lot of laps around Flamboro Speedway, competing in Super Stock events and testing a modified this year. While this will be his first Pure Stock event of the year at the Hamilton, Ontario based oval, he has been getting in the seat time at Full Throttle Motor Speedway.

Connor Parkes will be looking for a top-10 this time around, after just missing that mark the past two trips with a 12th and 13th. 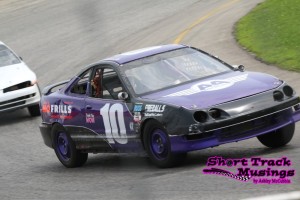 Courtney Scott is a past feature winner at Flamboro, and that has shined through with speed in both races. After losing a wheel in the first event, she rebounded to finish 15th in the second.

David Rockwood will be a factor for the win, as evident by running inside the top-five throughout the past two events. He scored a third in the first race, followed by a sixth.

Doug Wilman has shown speed, as evident by a strong qualifying performance in the second event with a third-place finish. However, it seems the SKLD Motorsports driver has been plagued by mechanical issues both trips to Flamboro, something he hopes to avoid on Saturday.

Ethan Marco missed transferring into the main event at the last race by a single spot, leaving him even more hungry this time around.

Gillian Hils will be looking to go for two in a row after out-battling Jo Lawrence to the checkered in the most recent event. The speed underneath her car is no surprise, as she finished second in the first race.

James Downing knows his way around a racecar, as evident by his crew abilities with some of the top teams in the province. Now he hopes to carry that into to the cockpit and run well in his first trip to Flamboro.

Jennifer Hatch will be making her first trip to Flamboro in a Pure Stock this season, but has plenty of experience behind the wheel with past experience ranging across a variety of divisions.

As he embarks on his second season behind the wheel, Jimmy Hooper is hoping for a top-15 this time around after placing 17th in the first event this year. 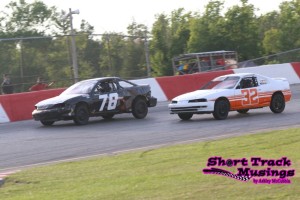 Jo Lawrence finally broke through for his first career APC Series win at Jukasa Motor Speedway, and now hopes to score the Pure Stock victory at Flamboro on Saturday. He battled back and forth with Hils for the win in the second event, showing he was quite capable of running with the front runners.

Joe Dunlop will be making his first trip to Flamboro Speedway this year, but is no stranger to success in the Pure Stock division, being crowned the Sunset Speedway Bone Stock Champion in 2019.

Jonathan Vey will also make his first appearance at Flamboro, but has been gaining seat time this season as a regular at Full Throttle Motor Speedway.

Jordan Morris runs up front in any Pure Stock event, no matter the track, as shown with a good bit of speed each time out this season. While finishing 19th in the first event this year, he was able to turn it around with a third in the second race. 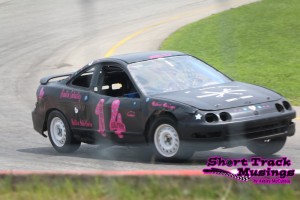 With each trip to Flamboro, Karlie Wilman has gained speed in learning the new car that she debuted this season. It’s a process she hopes continues after just missing the main event in her last outing following a 20th-place finish to kick things off.

Kassy Howard has shown that she can run up front at her home track of Delaware Speedway – a trend she hopes carries over to Flamboro this weekend.

Keara Gallant ran up front through qualifying and showed speed before mechanical issues took her out of the running in the most recent event. She’ll hope to have a much cleaner run this time around.

Kris Khan won the first event this year, and showed speed at the second race before ultimately finishing fourth. Given his track record around the province as a known winner and contender, he’ll be part of the conversation for the win on Saturday.

Kris Lawrence may be known for his late model and super stock abilities, but you can never count him out of Pure Stock competition. He placed sixth in the first event this year, before running into mechanical issues at the second.

Kyle Lucas knows what it takes to win at Flamboro, as evident by a couple trips to victory lane last season. Though behind the wheel of a new car this season, he has finished ninth and 10th in the pair of previous events.

Leonardo Labarbera has proven his ability at Flamboro with winning the track championship last season. Thus far in 2020,  he finished eighth in the first event, before late-race contact took him out of the running in the second.

Matt Boyes came out last season at Sunset Speedway, surprising some people with a couple feature wins in his rookie campaign. Now he will head to Flamboro for the first time, hoping to catch everyone off-guard.

Nic Ramsay has shown speed at Flamboro previously, as evident by qualifying inside the top-five at July’s race before he was plagued with mechanical issues. He rebounded at the end of the month, though, with a seventh.

Phil Givens is no stranger to running up front at Flamboro, having won there previously. and placed fourth and second in the previous events.

Reece Bourgeois will be hoping to crack the top-10 this time around after scoring a 16th-place finish in the second event Flamboro held this season to kick off her sophomore campaign.

Shawn Soloman showed speed behind the wheel last year at Peterborough Speedway, picking up a couple heat wins. That something he hopes to carry to Flamboro in his first trip there.

Stan Cook is another competitor to look forward being in the top-10 contention after finishing 17th in July.

Steve DeLeeuw has had a strangle hold on 18th, finishing there in both previous events. That’s something he hopes to improve upon this time around.

Willow Barberstock is no stranger to Flamboro Speedway with Ontario Modified Racing Series experience there, and has ran a Pure Stock before as evident by her success at Peterborough Speedway. Combining them together, she’ll be driving the car that Ben Gruntz showed speed with until issues on-track.

Zach Harrison will be looking for a top-10 in his second ever start behind the wheel of a racer, following a 13th in his debut.

While the racers will be battling for the trophy, there are some other great prizes that have been put up, courtesy of individuals. The complete list is below.
Sponsors;