Years Active: Been racing since 2007, only year did not race was 2018 due to buying a house and have run part time few years

Best Mini Stock racer would consider Doug Butler as been racing a long time, won almost everywhere multiple championships and has been a threat almost every single year

Plans going forward: To run big races, invitationals and to travel a bit on asphalt, going to try running full-time on dirt at Ohsweken Speedway – have a new car, going to try and balance both

Specials: 2 Chase for the Colours wins

Racing Plans moving forward: Try and play in limited late model and super stock well I can. But mini stock is where it’s at; will end up back there.

Biggest Wins: Anytime we parked in victory lane was a big win for us

Racing Plans moving forward: No confirmed plans at this time

Best mini racer: You know that is a hard one to pick only one, but I’m going to say Warren Paxton

Other notables
-Building and selling many top running cars over the years
-Giving Jason Tolton his first asphalt feature win ever this year – been racing 15 plus years and never had a win. He also finished sixth at Frostoberfest in 2019 in that car.
-Podiums: 2013 2nd place fall velocity; 2013 2nd place at Sauble home at home serious with sunset; 2016 3rd place fall velocity; 2018 2nd place Sauble invitational and many top-fives
-Points finish: 2014 I finished 2nd by 6 points behind Billy at Sauble and won points at FTMS that year too; 2016 3rd in points at sunset.
-Year End Awards: 2011 best appearing mini, 2011 finished 2nd in points at McColl 6 race series at sunset
-Cars sold

Things I Never Got: Feature win at Sunset Speedway

Racing plans: As you know I have my cars for sale and I have sold my 36 car, and pretty sure I have the 06 sold. Both are going dirt racing at Brighton . So as of right now I am retiring BUT if the 06 car does not sell you might see me couple times this year 😉 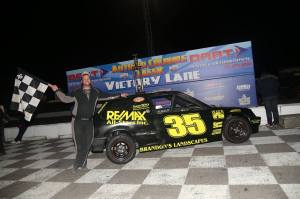 Best Mini Stock Racer in your opinion pick 1: this guy lol if I can’t pick myself…. Dave Bailey

Other notables: have won every invitational there is in mini stock with the exception of the new Jukasa; 2014 winning every single invitational except one

Racing Plans moving forward: Run full OSCAAR four and run mini stock whenever not in an OSCAAR or APC race, try and get back to dominant fashion 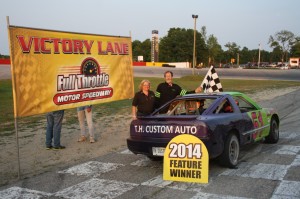 Championships: 7, including his rookie season

Specials: 2004 Season-ender consi win at Sunset, invitational wins at Grand Bend in 2007 and 2008, 2 T.D. Smith Invitational wins in 2003 at Varney, Mid season and End season Champion at Varney in 2002, feature win in a twin-25 for Special Olympics at Varney,

Years Active: Started racing in 1999 and raced for 17 years

Biggest win: winning 3 features in a night at Varney in 2014

Racing Plans Moving Forward: Continuing to promote racing and showcase the great race tracks and drivers we have in Ontario via Ingrid’s YouTube channel petalpower51.

Specials: 2nd at Delaware, 2nd at Chase for the Colours, 3rd at Kawartha OSCAAR Nationals

Other notables: 2nd in provincial NASCAR points for asphalt in 2014. 10-12 Sunset Invitational wins (other then Velocity)

If we could somehow make an invite only race would you be able to get a car for it? Yes!