Though before we reveal the next 9 drivers, here are 10 other Mini Stock driver profiles for competitors who did not make the list.

Champions: None but lead the points at Kawartha almost all season in 2012 until I had two engine failures two weeks in a row and one of those nights was a double point’s night .

Specials: Won a couple large invitationals at Kawartha Speedway against the best Mini Stock drivers at the time

Years Active: I ran mini for three years then went to Lucas oil sportsman then late model for a few races then oscar hot rods. So 2010 to present active years.

Biggest win: My first – the car was losing oil and oil pressure the whole race it was basically blown up when I rolled threw tech. I knew it was going south and wasn’t going to last but I was leading and about to win my first feature event so I wasn’t giving up till the car did and that little Neon stayed together just long enough.

Best Mini Stock Racer: It’s hard to name one great mini stock drive as I’ve grown to have friendships and great respect for most everyone I raced against.

My future plans: I will be pulling my Mini back out of storage and taking it to race a few events here and there, and I someday plan on getting a late model chassis and possibly running it in the OSCAAR Hot Rods and running some late model races

Biggest win: My first win in the mini stock class was huge after being terrible in 2016

Best Mini Stock Driver: Andy Kamrath is the best driver hands down by a country mile.

Racing Plans: Full-time at Sunset in the Mini Stock. I would love to give late model a try in the next year or so, and hopefully move up; bored of Mini Stock. 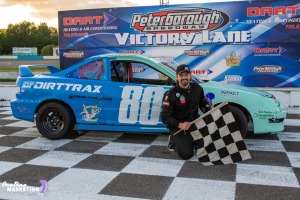 Other notables: Rookie of the Year / Best Appearing Car / 4th Overall in points / most race wins in 2019 MS PTBO

Racing Plans moving forward: Taking a year off and coming back for a strong Mini-Stock run in 2021. 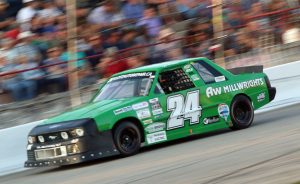 Tracks run in a mini: Flamboro,Sauble

Other notables: 3rd at Sauble Summer Showdown and fifth at Frostoberfest

Racing Plans moving forward: Run as many races I can this year at Flamboro, as well as travelling to Sunset, Jukasa, and Sauble for invitationals

Biggest win: 1 win at Oshweken my second time on dirt

Championships: None, but could have the record for runner-ups.

Crown Jewel wins: Nope, none of those either. multiple top-five’s

Best mini Stock Racer in your opinion pick 1: Dave Bailey. I learned a ton following him around Flamboro in my early years.

One that got away: July 21, 2018, 2nd feature, APC night. 13th at the completion of lap 1, took the outside lane all the way up to p2 behind Mark Klotz by lap 12. Green flag start to finish. Was too patient and it cost me the win. https://youtu.be/JmJFWyZaFTo

Plans/goals moving forward: To compete in the top 5 at invitationals. Keep season win streak alive. Be fast out of the gate with the new car. Crash less than 2019.

Years active: 13. Last year I was off, plan to return this summer

Racing Plans moving forward: Planning to continue at FTMS with my Integra

If we could somehow make an invite only race would you be able to get a car for it?: Definitely!

Biggest Win: I’ve had lots of good races and a few great ones with good back and forth action that made it entertaining to watch with drivers  like Eric York  and mike Robinson. If there was 1 thing that I would be looking forward to, it would just be to keep having those great clean hard races with more drivers.

Plans moving forward: Where I run is kinda up in the air if it’s full time or part time. Right now, the plan is to stay in the Mini Stock. Yes, I have ambitions to move forward especially to Legends or Late Models, but even if you take money out the  equation, I can admit I don’t have the knowledge or manpower that it takes to run and maintain a higher class car at this current time. Mini Stocks require a lot of time but it’s more manageable for me.