MILLGROVE, Ontario — Putting in a stellar performance all night long, James Stanley swept the pair of 20-lap features for the Ontario Pro Sprints. 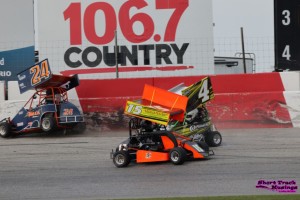 Mark Hamacher led the field off the start as Summers worked his way up to second in front of Lisa Hamacher, but the caution came out for a wreck turn one and two. Brown would make contact with the outside wall, as Northcott went for a spin.

The second attempt to start the race went clean as Mark Hamacher led once again, now in front of Summers, as James Stanley and Lisa Hamacher battled for third. Stanley continued to move forward, taking over the lead on Lap 3 in front of Mark Hamacher, Shawn Stanley, and Kemps.

The race would be halted, with the caution coming out the same lap for Wardell. With 17 laps to go, James Stanley led Summers, Shawn Stanley, Kemps, Triska, Lisa Hamacher, Mark Hamacher, Tyler Cullen, Battilana, and MacDonald. 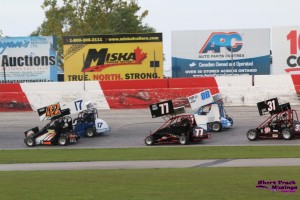 James Stanley got a good restart with Shawn Stanley moving into second in front of Kemps and Triska, as Cullen and Summers battled for fifth. Cullen would get the spot, passing Triska for fourth on Lap 8. Behind them, Summers ran sixth in front of Battilana, Mark Hamacher, Bender, and MacDonald.

The field continued to shuffle, with Kemps moving into second on Lap 12, bringing Cullen through with him as Shawn Stanley now ran fourth in front of Triska, Summers, and Battilana. Battilana would then get by Summers for sixth on Lap 17.

Come second feature, it’d be Rob Summers leading Ryan Battilana and James Stanley, with Stanley pacing the field on Lap 3 ahead of Summers, as Tyler Cullen and Battilana battled for third. Cullen took the spot on Lap 4, moving up to second, bringing Kemps, Shawn Stanley, and Triska through with him to bump Battilana back to sixth in front of Summers, Lisa Hamacher, Mark Hamacher, Sheldon Bender, Brian MacDonald, and Willy Northcott. MacDonald would then get by Bender on Lap 11, bringing Northcott through with him.