The rain may be playing havoc for racecar drivers, but there’s been some great racing on-track across the province through the month of July. It’s why we need to think about what’s going on with the four-cylinders.

Through four races, Sunset Speedway has only seen one repeat winner, with Doug Butler accomplishing the feat. Are we surprised? Hardly so. There’s a reason why he is a past track champion. He also has won crown jewels across the province. Lastly, do you remember the top 10 mini stock drivers list? There was a reason why his name was at the top.

The only difference is in recent years, it has not been a simple cake walk for the No. 10 Nissan with others challenging him en route to victory.

Outside of Butler, two others got to experience a win – Charlie Smith and Matt Boyes. It was sort of a tale of two tapes here.

Smith, the man known for controversy, makes his return to victory lane after a couple years through someone else’s disqualification. Boyes, takes a car he bought last winter proven for speed and backs up those sentiments with his driving.

Even finding victory lane different ways, both have potential based on performance to repeat the accomplishment this year and join Butler as a multi-winner.

It’s also a matter of not if, but when for Josh Bullen. He has driven his mustang to three straight runner-ups following a third in the Melissa Bullen Memorial. They say if you keep running up front, and putting yourself in position, it will happen. He’d be a good bet for August. So would Tyler Seaboyer, once he gets that car back to the track. 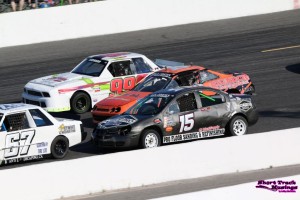 It’s been also fun to watch the newer faces, as a second year behind the wheel is benefitting Connor Maltese with two top-five’s. Paul Bogensberger Jr. has also shown speed in his return behind the wheel with a pair of top-five’s, and Bryan Penny could develop into someone to watch in his first outing.

When it comes to Flamboro Speedway, it’s been all about experience to get to victory lane, and when you get on a roll, it just seems to add up quickly.

Gillian Hils is the only driver to not repeat yet as a winner, but you could base that on being the first year with her unique station wagon car in finding what she needs.

2019 Frostoberfest winner WIll Gibbons started off the year winning the first three, followed by Dylan Sharpe winning four in a row through July, and then Shawn Taylor swept the last night of the month. Technically, Taylor has three wins to his credit with another in July.

If you look back at recent years, Taylor and Sharpe has been the pair to watch at Flamboro, along with others when it came to being successful. More checkered flags this year would not be a surprise, but don’t think it will end with them. Karl Sault has ran strong in his limited starts after his 2019 championship, with continued progress for others likes John Istead, Mike Gilmour, and Cole Quinton. 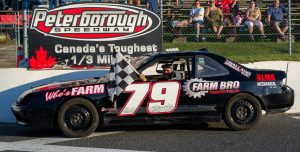 Peterborough Speedway has only gotten two nights in, but it has practically become Ryan Oosterholt‘s playground. He has won all six heats and both features, continuing the dominance fans grew used to over the past two years. With a reputation for a being a tough track, it’s a streak that has to end sometime – but the question is when, and by whom?

The same five drivers also have finished top-five both races, meaning the competition is right there on his heels. Jeremy Kelly, Ember Junkin, Brad Lavalle, and Kevin Stutt just need a little more and maybe they can make it happen.

Brian Wilson has been showing the way at Full Throttle Motor Speedway, which has become a trend over most recent seasons with a championship recently. With a pair of wins and two runner-ups in four races, it’s easy to see why he’s the man to beat.

However, the young blood is getting closer to equaling him as Thomas Wunsch is living up to the high expectations, scoring a win and three top-five’s in four races. Other contenders have to include Chris Pendlebury (pair of thirds), Jeremie Dunguy (a third), Mitch Wilkin (a third and pair of fifths), and Sandy Eccles (third and fourth).