Craig Cole will have some new bling to show off to his friends, as he won the Pure Stock 40 lap-feature at Flamboro Speedway’s Frostoberfest on Saturday.

Kris Lawrence initially posted the quickest lap in time trials at 18.973 seconds, but would not pass post-qualifying inspection, seeing his time disallowed and being sent to the b-main. Nic Ramsay would pick up the pole virtue of his lap of 19.144 second ahead of Craig Cole (19.162), Gary Slama (19.266), Gillian Hils (19.359), and Jaden Chapman (19.37). David Rockwood qualified sixth, followed by Rodney Rutherford, Barry Harmer, Marshall Schrenk, and Hailey McNicol.

With so many cars on the property, a 12 lap b-main would be ran to the set the final six cars on the field. The action started from the drop of the green flag, with a caution on the second lap for a stack-up in turns three and four, that resulted in Rick Vankleef around on the frontstretch, collecting Brandon Steele, Cheyenne Charles, and others.

At the same time going into turn two, Steve DeLeeuw would spin Karlie Wilman out of the second spot. Due to her incident being after the yellow flag, Wilman was given the position back for the restart, but headed pit side on the restart with problems.

Matt Langford got the lead on the restart ahead of Ethan Marco, Kris Lawrence, and Jordan Morris. Lawrence would get alongside Marco for second on Lap 2, completing the pass a lap later, bringing Morris through with him. Marco now ran fourth as DeLeeuw and Langford battled for fifth ahead of Givens. Langford got the spot, passing Marco on Lap 9 to more into fourth. Givens moved up to fifth ahead of Nathan Rhea, Len Sterritt, and Marco. Sterritt then got alongside Rhea for sixth on Lap 11, but was unable to complete the pass. 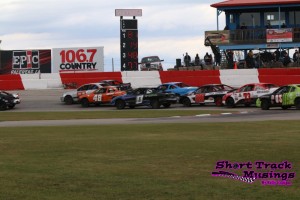 The main event did not start off much cleaner, with Morris tagging Doug Wilman on the opening lap, collecting Reece Bourgeois in the process, ending her day as she stopped on the frontstretch.

Nic Ramsay led off the restart ahead of Craig Cole, Gary Slama, Gillian Hils, Jaden Chapman, David Rockwood, Kris Khan, and Darren Glavin, as Hailey McNicol and Kyle Lucas battled side-by-side for ninth on Lap 5, with Barry Harmer and Kris Lawrence side-by-side for 11th. Meanwhile, deep in the field, Mark Lamond would go around on the backstretch, courtesy of contact from Wilman.

McNicol took over ninth on Lap 6, with Lawrence following her through. Lawrence then got alongside her for ninth, ultimately continuing to climb to seventh by Lap 9, as Khan and Glavin battled for eighth. Glavin got the spot on Lap 10 ahead of McNicol, Morris, Khan, Kyle Lucas, and Rodney Rutherford.

At the front of the field as they weaved through lap traffic, Cole would make his move for the lead, getting alongside Ramsay for the top spot on Lap 12, and passing him a lap later as Slama ran third. Hils ran fourth ahead of Rockwood, Lawrence, Chapman, Glavin, and McNicol.

Lawrence continued his climb, getting by Rockwood to move into fifth. He would then make his move on Hils, tagging the back of her as they tried to lap Ed Peterson. She’d get real sideways, ultimately fading back through the field to the back end of the top-10.

Rockwood would take back fourth in the process, with Chapman up to fifth ahead of Lawrence and Glavin, as Hils battled Morris for eighth. Morris got the spot, bringing Rutherford through with him. Meanwhile, Jennifer Hatch pulled into the infield done for the day on Lap 27.

At the front, Cole continued to lead, with Slama able to get alongside Ramsay for second as they continued their way through traffic. The move worked out, as he took over the runner-up position on Lap 30, as Rockwood ran fourth ahead of Lawrence, Chapman, Glavin, Morris, McNicol, and Rutherford.

Craig Cole held on the rest of the way to score the victory, with Nic Ramsay passing Gary Slama with four laps to go for second. David Rockwood and Kris Lawrence rounded out the top-five ahead of Jaden Chapman, Darren Glavin, Jordan Morris, Rodney Rutherford, and Hailey McNicol.