When Will Gibbons was getting ready for the weekend, he told everyone he was coming igloo hunting. He accomplished the goal he set out for, leading flag-to-flag en route to winning the Mini Stock portion of Flamboro Speedway’s Frostoberfest on Saturday.

Will Gibbons grabbed the initial lead off the start ahead of Bridge and Shaw, with the caution coming out on Lap 2 for Lewis’ car dying in turn two. The restart was filled with close racing, with Watson turning Wilson, with Wilson going around and keeping it going to stay under the green flag.

Gibbons led the field still with Bridge in second ahead of Shaw and Taylor, as Watson got alongside Pendlebury for fourth ahead of Brown, Edwards-Kiss, and Young. Watson seemed to have the move made, but Pendlebury was able to pull the crossover in return to make a move back.

Meanwhile, Lankin would go around in the turn two for the caution. With 31 laps to go, Gibbons led Bridge, Shaw, Taylor, Watson, Pendlebury, Brown, Edwards-Kiss, Young, Spencer-Walt, and Istead. 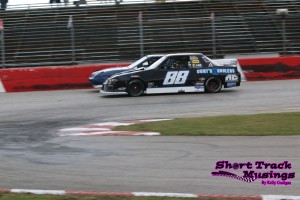 Gibbons got a good restart to retain the top spot ahead of Bridge and Shaw, with Taylor and Watson side-by-side for fourth ahead of Pendlebury, as Brown goes for a slide through the grass. Watson got the spot on Lap 12 ahead of Taylor and Pendlebury, with Sault alongside Edwards-Kiss for sixth. Sault had qualified in the top-five, but took the challenge to come from the rear to win for the bonus money.

He’d never get a chance to complete the pass, as the caution came out on Lap 13 for Brown getting by hooked by Gilmour in turns one and two. With 27 laps to go, Gibbons led Bridge, Shaw, Watson, Taylor, Pendlebury, Edwards-Kiss, Sault, Spencer-Walt, Istead, Gilmour, Woodley, and Bos.

Gibbons got another good restart ahead of Bridge, Shaw, Watson, and Taylor, as Pendlebury and Sault battled for sixth. Sault was unable to complete the pass, falling in lie behind Pendlebury. Behind them, Edwards-Kiss ran eighth ahead of Istead, Spencer-Walt, and Gilmour.

Sault would challenge Pendlebury once again on Lap 18, completing the pass this time around. Spencer-Walt continued his climb forward, passing Istead for ninth on Lap 20, with Wilson back up to 11th ahead of Woodley, Gilmour, and Laflamme. Sault’s climb continued as he got alongside Taylor for fifth on Lap 22, completing the pass a lap later. Wilson would challenge Istead for 10th, but was unable to complete the pass as Brown headed off the track.

The clean racing would come to halt once again, with the fourth caution on Lap 26 for Gilmour and Lewis getting together in turns one and two, both going around and collecting Bos with them. With 14 laps to go, Gibbons led Bridge, Shaw, Watson, Sault, Taylor, Pendlebury, Edwards-Kiss, Spencer-Walt, Istead, Wilson, Woodley, and Laflamme.

Gibbons got another good restart with Bridge still second, as Shaw and Watson battled for third. Shaw held off the challenge, with Sault up to fifth ahead of Taylor, as Pendlebury and Edwards-Kiss battled for seventh. Pendlebury kept the spot, with Wilson challenging Spencer-Walt for ninth. 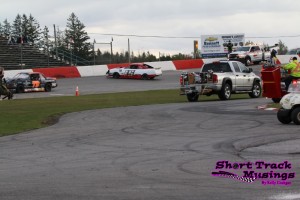 Watson would mount another challenge on Shaw for third, but was once again unable to complete the pass. Instead, Sault made his way around Watson to take over fourth. The fifth caution then came out on Lap 34 for Laflamme having the throttle stick, getting into the outside wall off of turn four, sending Thomson through the grass in the process.

While the front row got away on the restart, Shaw would not get going as quickly. This stacked up the infield line, with Watson getting into her, sending her around, collecting Pendlebury in the process. The second attempt was clean with Gibbons getting away again as Sault challenged Bridge for second, but the yellow lights were back on shortly thereafter for Watson spinning Wilson in turn two.

Will Gibbons got a good restart, pacing the field to the checkered with Karl Sault second ahead of Kevin Bridge, Shawn Taylor, and Ryan Edwards-Kiss. Jake Watson finished sixth, followed by Samantha Shaw, Kyle Istead, Rick Spencer-Walt, and Terry Woodley.

Will Gibbons was presented with the Qwick Wick Fastest Lap Award following the event.