Andy Kamrath Makes it Six in a Row at Sunset Speedway

When you find your groove, it’s difficult to be beat, and Andy Kamrath is proving that as he scored his sixth consecutive Queenston Chevrolet Buick GMC OSCAAR Modifieds presented by Scott Reinhart Trailer Sales Ltd., Touchwood Cabinets, and The Fyre Place & Patio Shop feature victory on Saturday at Sunset Speedway. 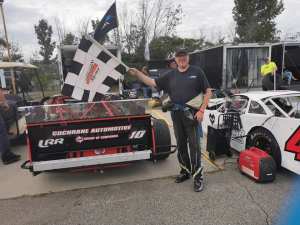 Before the green flag, Everingham ran into some issues, resulting in him dropping to the rear of the field.

Dale Reinhart grabbed the early advantage ahead of Milwain and Edwards, as Strawn and Kamrath ran side-by-side for fourth. Strawn got the advantage, getting alongside Edwards for third and passing him on Lap 4. He continued his climb, getting alongside Milwain for second a lap later.

Just outside of the top-five, it was a hornet’s nest with three-wide racing at times between Keen, Horner, and Emms. Emms would get a run underneath Keen going into turn three on Lap 6, with Keen coming down, resulting in contact between the pair. Emms would then head down pit road a lap later, done for the event.

At the front, Reinhart still held the advantage with Strawn up to second ahead of Milwain, Kamrath, Edwards, Keen, Balson, Newman, and Horner, with Downey alongside Jeff Showler for 10th. Downey got the spot on Lap 11, with Kamrath getting by Milwain a lap later for third.

Edwards would look to get by Milwain next, though bounced off the curb in the middle of turn three and four, with the pair making contact as they went up into the wall for the caution on Lap 13. Unfortunately, both drivers were out of the event early as a result. With 32 laps to go, Reinhart led Strawn, Kamrath, Keen, Balson, Newman, Horner, Downey, Showler, and Dick.

Strawn grabbed the advantage on the restart, taking over the top spot ahead of Reinhart and Kamrath, but the caution came out for Newman going around.

Strawn got a good restart to hold serve ahead of Reinhart, Kamrath, Keen and Balson, as Downey and Showler battled for sixth ahead of Horner. Downey got the spot, with Showler looking to follow him through. However, the caution was back out on Lap 20 for Keen blowing up. in the midst of the smoke, Balson went around, backing the No. b10 into the turn two wall with slight rear-end damage.

Strawn got another good restart with Kamrath making the move up into second ahead of Reinhart, Downey, Showler, and Horner. Balson began his climb back through the field, passing Horner for sixth on Lap 23, bringing Newman through with him. Balson then got by Showler, for fifth on Lap 26, just before the fourth caution as Everingham went around. 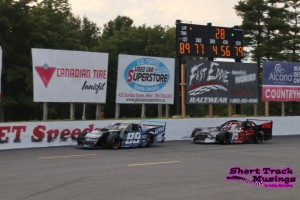 Kamrath would utilize the restart to take the lead, but was put back in line when the sixth caution came out on Lap 28 for Balson going around, this time courtesy of Newman.

The back-to-back yellows did not deter Kamrath go, as this restart was as smooth as the previous with getting the lead ahead of Strawn. Downey was able to make his way up to third ahead of Showler, Horner, Cornell, Balson, Newman, and Wilson. The racing would be a little chaotic with a couple lapped cars mixed in, but Balson cleared the lapped cars, before passing Cornell to back into sixth, with Newman right behind as Cornell dropped back to eighth.

The race was broadcast live on the GForce Network over their website. The complete broadcast can be re-watched on YouTube at https://www.youtube.com/watch?v=clwTzhP1Z-U.

The next event for the Queenston Chevrolet Buick GMC OSCAAR Modifieds presented by Scott Reinhart Trailer Sales Ltd., Touchwood Cabinets, and The Fyre Place & Patio Shop is at Sunset Speedway on Saturday, September 19. Notably, it marks the 100th feature for the open-wheel superstars.

There will be 100 fans in attendance, with those tickets already claimed and sold. The event will featured on GForce TV’s Lite production, available on their website at http://www.GForceTV.net on Sunday night.