In a battle that ultimately concluded with a crash coming to the checkered flag, Jo Lawrence picked up the APC Auto Parts United Late Models Series victory at Sunset Speedway. 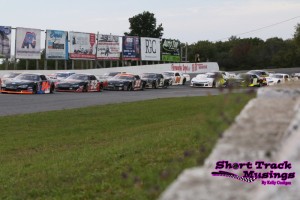 Gresel would lead the opening lap, as Stade and Benedict battled for second. However, the caution came out on Lap 4 for Patrick Freel spinning Nick Goetz, resulting in Mat Box turning Jade Franklin around. Tyler DiVenanzo caught a piece as he tried to avoid, while Shawn Chenoweth got into Dwayne Baker, with Baker getting into the wall to end his night early.

Gresel led the restart with Pete Shepherd jumping into second ahead of Lawrence and Pritiko, with Sheridan and Benedict side-by-side for fifth. Sheridan got the spot on Lap 7, bringing Stade through with him to bump Benedict back to seventh ahead of Lapcevich. Patrick Freel would challenge Lapcevich for eighth, but was unable to complete the pass. Instead, Watson made his way around Freel for ninth on Lap 12.

At the front of the field, Shepherd reeled Gresel back in for the lead, getting alongside the No. 81 for the top spot on Lap 15. Their battle wouldn’t last long, though, with Franklin going around in turn two for the second caution on Lap 17. 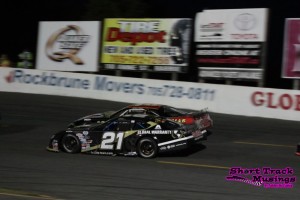 The battle for the lead resumed on the restart, with Pritiko and Lawrence side-by-side for third behind them ahead of Sheridan and Watson. Shepherd took the top spot on Lap 19, with Lawrence following through for second a lap later. Pritiko moved into third ahead of Gresel, Watson and Sheridan, as Stade and Lapcevich battled for seventh. Watson would get by Gresel for fourth on Lap 23, with the yellow flag a lap later for Lapcevich going around after contact with Shae Gemmell, collecting Chenoweth in the process.

Shepherd got a good restart to keep the lead ahead of Lawrence, as Pritiko and Gresel battled for third with Watson alongside Sheridan for fifth. Pritiko  would get the third spot on Lap 28, bringing Watson through with him to bump Gresel back to fifth ahead of Sheridan, as Benedict and Stade battled for seventh. Their battle wouldn’t last long, with the fourth caution on lap 33 for Box spinning Goetz.

Shepherd got another good restart with Watson moving into second ahead of Lawrence, Pritiko, Gresel, Stade, Sheridan, and Benedict, as Ryan Kimball and Gary Adriansen battled for ninth. Stade would get alongside Gresel for fifth on Lap 37, with Watson going to the outside of Shepherd for the top spot a lap later. The move worked as Watson took over the top spot on Lap 39, with Lawrence next in line to challenge Shepherd.

Lawrence then moved into second on Lap 41 ahead of Shepherd, Pritiko, Stade, Gresel, Sheridan, Benedict, Kimball, Adriansen, Freel, and Shawn McGlynn. Sheridan would then get alongside Gresel for fifth on Lap 44, with the fifth caution coming out a lap later for Gemmel spinning Chenoweth, followed by Goetz spinning Di Venanzo in the chain reaction. Under caution, Benedict gave up his spot inside the top-10 to pit due to shock issues.

Watson got a good restart to keep the advantage ahead of Lawrence, as Pritiko and Shepherd battled for third ahead of Stade, Kimball, Gresel Freel, and Sheridan. Shepherd would get the spot on Lap 49, with Gresel alongside Kimball a lap later for sixth.

Kimball held onto the spot, with the sixth caution coming out on Lap 53 for McGlynn going around, followed by a spin for Wickett and Dale Shaw getting into the outside wall in the chain reaction. Under the yellow flag, Box, Sheridan, and Gresel headed down pit road.

The restart saw a battle for the lead between Watson and Lawrence, with Shepherd and Pritiko once again battling for third. Stade held down the fifth spot behind both of them, with Kimball and Tom Gibbons side-by-side for sixth as Ray Morneau headed down pit road, done for the event. Kimball held onto the spot, with the seventh caution on Lap 56 for McGlynn going around courtesy of Franklin, collecting Chenoweth and Gemmell in the process.

Watson got a good restart to hold serve ahead of Lawrence, as the battle for third resumed on the restart between Shepherd and Pritiko ahead of Stade. It wouldn’t take long for another yellow flag, though, as that came out on Lap 60 for Sheridan going up in sparks before coming to a stop entering turn one. He would climb out of the car, sharing his displeasure with Erik Della Riva for their contact prior to.

The restart would see Lawrence able to stay with Watson this time around, allotting the pair to go back and forth. Over the next 10 laps, they would run side-by-side, pulling the crossover on each other a couple times for the top spot.

Their battle would only come to an end due to the ninth caution coming out on Lap 72 for debris on the frontstretch. With 28 laps to go, Watson led Lawrence, Shepherd, Pritiko, Kimball, Stade, Gibbons, Freel, Chenoweth, Lapcevich, Gemmell, Di Venanzo, Goetz, Della Riva, Franklin, and Wickett.

Lawrence got a good restart to grab the advantage, but the yellow flag quickly returned for the 10th caution on Lap 74 for Gibbons sliding through the grass, going around, collecting Gemmell up with him. Franklin would then spin afterwards.

Lawrence got another good restart, holding serve ahead of Watson, Shepherd and Pritiko, as Kimball and Stade battled for sixth, with Freel and Lapcevich side-by-side for eighth behind them. Kimball snagged the sixth spot on Lap 76, with Freel clearing Lapcevich a lap later. Behind them, Di Venanzo and Della Riva battled for eighth, with Di Venanzo getting the spot on Lap 79 ahead of Della Riva, Franklin, Goetz, and McGlynn.

Lapcevich would have a peek on Freel for eighth on Lap 81, though was unable to clear, allowing Freel to mount his challenge on Stade. He’d make contact with the rear bumper of the No. 17 on Lap 83, but Stade held onto it so no harm, no foul. Instead, the 11th caution came out a lap later for Della Riva spinning Di Venanzo in turn four.

The following restart was clean with the top-six getting strung out single-file as Lawrence led Watson, Shepherd, Pritiko, Kimball, and Stade, with Freel and Lapcevich side-by-side for seventh. Behind them, Della Riva ran ninth, as Goetz and Franklin battled for 10th ahead of Chenoweth. Chenoweth then went to make it three-wide, resulting in contact that sent Franklin around for the 12th caution on Lap 87.

Another restart, and the top-five once again got away single-file with Lawrence still pacing the field ahead of Watson, Shepherd, Pritiko, and Kimball. Behind them, Freel and Stade ran side-by-side for sixth, with Freel getting the spot on Lap 89, as Lapcevich looked to follow him through. Behind them, Goetz and Chenoweth battled for ninth , with Chenoweth getting the spot on Lap 94, as Lapcevich cleared Stade for seventh.

Behind these battles, the field was stacked up and that wouldn’t be produce good results. Goetz would go around as he tried to get 10th from Chenoweth. McGlynn would have nowhere to go, getting into the side of Goetz, as Franklin went around. Wickett would then made contact with McGlynn trying to avoid, before contact from Di Venanzo resulted in Wickett’s car getting stuck underneath McGlynn’s. Thankfully, all of the drivers were uninjured in the incident. 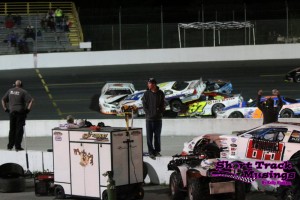 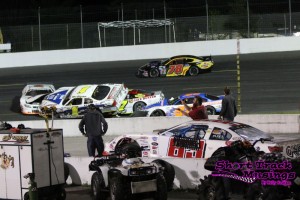 With so many yellow flags back-to-back and laps ran under their cautions, Stade ran out of fuel under this 13th caution, resulting in him giving up his top-10 position to come down pit road. 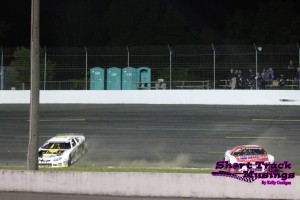 The first attempt at a restart produced another caution, with both McGlynn and Gibbons going around in turn four. It is worth noting Watson had played the nudge on Lawrence’s back bumper off of turn two to get the lead. Though with going back a lap in scoring due to no laps completed, Lawrence was given back the top spot.

The second attempt would see Lawrence and Watson battle back and forth, with Watson getting ahead of Lawrence with four to go. Lawrence would tag the back bumper of the No. 9 a couple times over the next two laps, though was unable to move Watson up the track.

On the final lap, Lawrence gave Watson a shot going into turn three, followed by another mid-way through the corner. The second bump got the No. 9 sideways, allowing Lawrence to get alongside. A bump while side-by-side got Watson out of shape, resulting in the No. 9 doing a 180 spin, and slapping the outside wall on the frontstretch with the driver’s side as he came across the finish line.

Lawrence was able to get to the checkered first, scoring the victory, with Watson credited with second. Pete Shepherd finished third ahead of Ryan Kimball and Treyten Lapcevich. 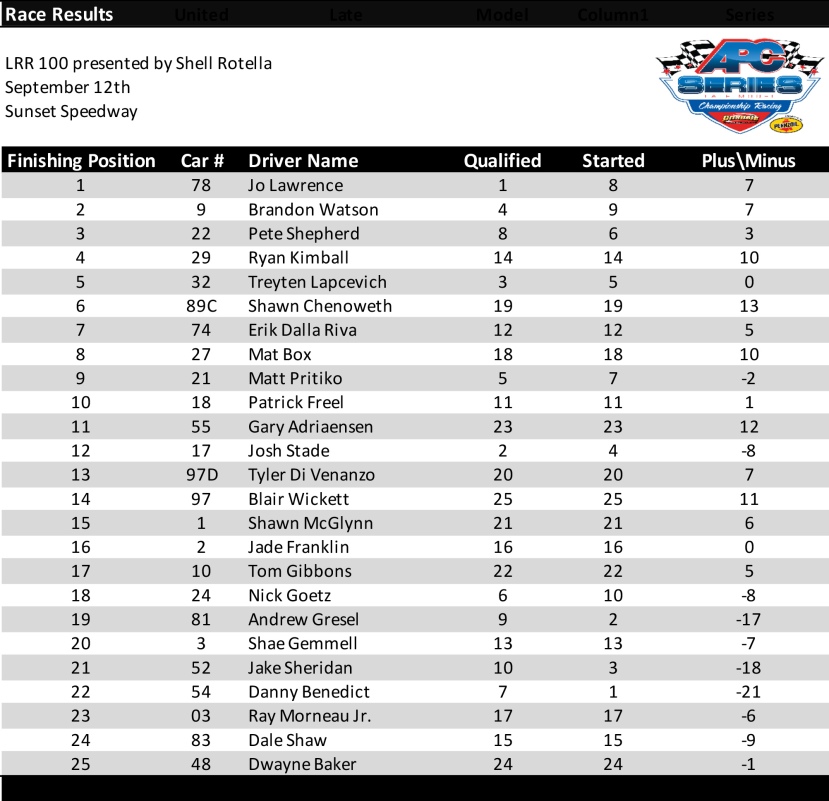