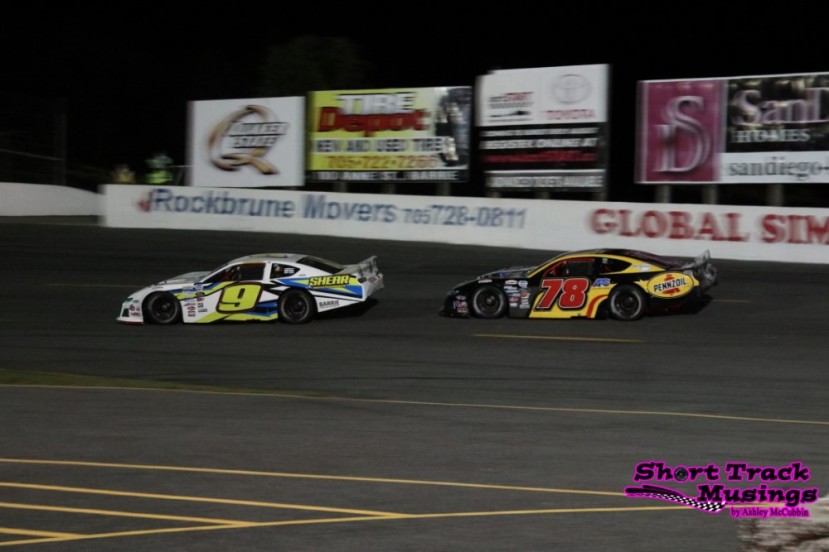 INNISFIL, Ontario — If anybody was thinking there’d be fireworks in the shortened APC Auto Parts United Late Models of Ontario season, that was the case on Saturday night at Sunset Speedway.

Battling for the win late, contact was made between Jo Lawrence and Brandon Watson resulting in one driver in victory lane, while the other was left with a runner-up and a wrecked racecar.

Following a caution with five laps to go, the pair lined up side-by-side to battle, with Watson making contact with Lawrence going into turns one and two. It’d result in the No. 78 getting up the track, allowing Watson to take over the top spot. However, a 14th caution brought the pair right back together again.

The restart saw the pair battle once again as Watson got out ahead, with Lawrence giving him a couple taps to the rear bumper thereafter. A series of bumps through turns three and four would get the No. 9 sideways off of turn four, before Watson did a 180 spin, slapping the outside wall with the driver’s side as Lawrence crossed the finish line for the victory.

“It’s honestly awesome,” Lawrence told Short Track Musings of the victory. “Definitely one on the bucket race.  I love race at Sunset and everyone that works here – Brian, Sandra, all the staff that put in the hard work are amazing. I am pretty happy to check this off as a win for me. It’s a big one.”

Lawrence went on to add the race to the line ultimately was stirred by what occurred on the restart prior to that after the red flag.

“Definitely after the red flag, I didn’t think the racing was going to be like that,” he commented. “I definitely felt like he used me up more than he should have. It’s just a matter of respect thing for me. Earlier in the race, we touched and I feel like he got into me, I got into him, and we could move on. 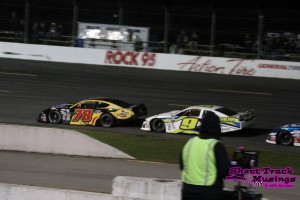 “The last bit of racing is a little more dirtier than I want to do and unfortunately, it is what it is and that’s the way racing goes sometimes at these short tracks. Hopefully we can get past it and move on.”

The race to the checkered was the tip of the ice berg of the pair with their battle going on through the final 30 laps of the event. There was a period where they traded the lead back and forth each lap over 10 circuits, pulling the crossover back and forth three different times.

For Watson, being able to run up front was a challenge through the day as he said they fought finding grip through practice.

“Started out the race unfortunately a little bit loose, but we were able to fight our way up after quite a few laps to the top spot,” he told SHORT TRACK MUSINGS. “Led quite a few laps up there and after I got passed three quarters into the restarts so we were just hanging out back out there, trying to save as much as I could for the win. (I) had a good run at the end, got into the top spot.

“We battled hard – he got into me, I got into him, stuff like that. So unfortunately, it went a little bit too far at the end. We were battling pretty good and unfortunately we just got drove a little too hard, got spun out, and hit the wall pretty good.”

When told of Lawrence’s post-race comments, Watson didn’t feel there had been a line of respect crossed along the way. 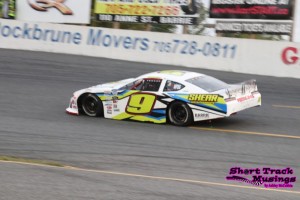 “Definitely mine was kind of a racing, trying to get the win,” he shared. “I didn’t wreck him, put him up into the wall – just used up more than my lane, which is a common thing, in short track racing.. Unfortunately, getting spun out on a straightaway is a little tougher deal.

“But if he thinks that’s okay, that’s his thoughts. Unfortunately, we’ve got a wrecked racecar and at Jukasa, we’ll see what happens.”

The contact only intensifies the championship battle as the pair will head to Jukasa Motor Speedway on September 26 for twin-75 lap events, with Lawrence leading Watson by a single point.

Lawrence knows his way around Canada’s Crown Jewel, as evident by picking up the checkered flag last month.

“Definitely excited,” he commented. “I love Jukasa. Such a fun, smooth track and really good racing there. I think we have a good car, good base set-up there and a good team to make it all work really.”

It was Watson finishing second to Lawrence in August, but it should be noted the No. 9 has visited victory lane at Jukasa previously.

“It’ll be a good final show for us,” Watson commented. “Like I said, we’ll definitely be there and looking forward to another top finish and maybe get the win there.”