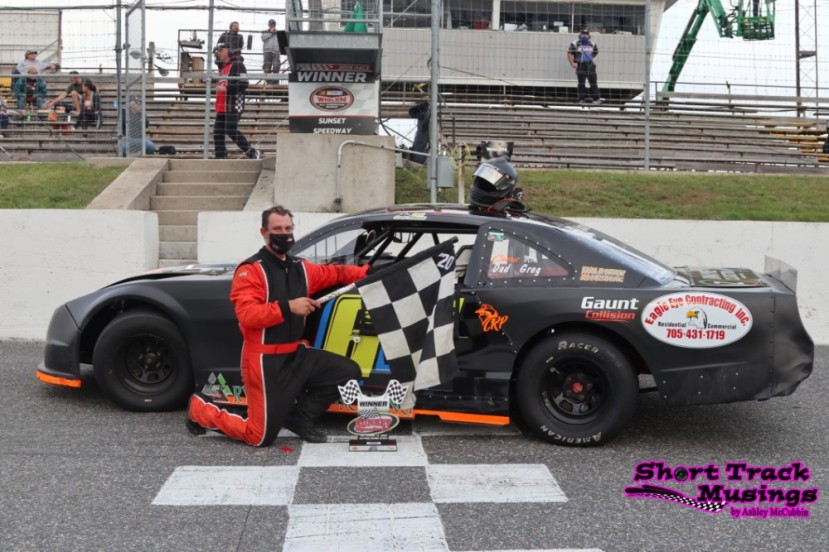 Getting back behind the wheel after a brief hiatus, Ryan Semple returned to victory lane at Sunset Speedway on Saturday, as part of the McColl Racing Enterprises Super Stock Series action. 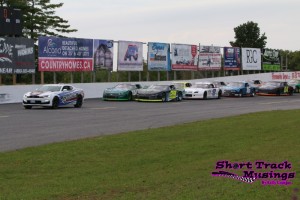 Pepper broke out to the early lead on the first lap ahead of Grubb and Latimer, but it wouldn’t last with Grubb getting alongside him on Lap 3. Grubb then put the No. 36 out front on Lap 4 ahead of Pepper, Latimer, Tiemersma, and Davey. Collver ran sixth, with Semple and Mombourquette side-by-side for seventh. Semple got the spot on Lap 7, with the caution coming out a lap later for Robb slowing.

Grubb got a good restart to maintain the advantage with Latimer up to second ahead of Davey, with Semple alongside Pepper for fourth. The battle wouldn’t last, though, as Mombourquette would make contact with Pepper’s back bumper, sending the No. 29 around for the second caution at Lap 10.

The restart saw a battle for the lead between Grubb and Latimer, with Semple and Davey side-by-side behind them for third. The battles up front, stacked up the field, with the top-eight stacked like a pace lap through the next four circuits. 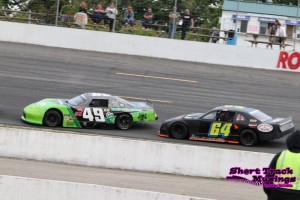 Grubb’s perseverance paid off, though, taking the lead back on Lap 16 , with Davey, Semple, and Tiemersma following him to bump Latimer back to fifth. Semple would tag Davey for second a couple laps later, though it’d take to Lap 23 before they’d get side-by-side. Semple made the move count, taking over second a lap later ahead of Davey, Tiemersma, Collver, Latimer, and Brekelsman. Brekelsman fell back a spot on Lap 28, though, courtesy of Mombourquette.

Semple’s climb towards the front found himself on the back bumper of Grubb with just over 10 laps to go. He’d give the Ford a couple small bumps going through the ends of the track, ultimately getting the run underneath to drive on by and take over the top spot. Grubb now ran second ahead of Davey, Tiemersma, Collver, Mombourquette, and Latimer, with Davenport and Brekelsman side-by-side. Davenport was able to complete the pass, getting by Latimer a lap later for seventh.