In a race that saw close battles all day long, Gillian Hils wound up victorious in the Pure Stock 40 at Flamboro Speedway on Saturday.

The heats were full of action with only six drivers from each transferring to the main event. 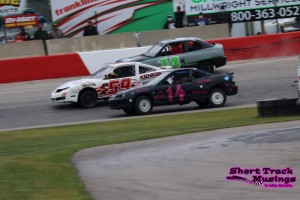 Come the b-main, Rockwood took the early lead, with Gallant and Pelley side-by-side for second. Gallant got the spot on Lap 2 ahead of Pelley, followed by DeLeeuw, Everingham, and Fluit. Everingham would get alongside DeLeeuw for fourth on Lap 4, taking the spot a lap later.

The rest of the event ran pretty clean with David Rockwood scoring the win to qualify ahead of Keara Gallant, Brent Pelley, Coltin Everingham, Steve DeLeeuw, and Courtney Scott. Stan Cook was the first to not qualify in seventh ahead of Jon Vey, Karlie Wilman, Brian Gamble, Austyn Jennett, Kassy Howard, and Reuben Fluit. James Downing would fail to finish, while Dave Backes, Jimmy Hooper, and Mike Egert did not take the green flag.

Come feature time, Gillian Hils broke out to the early lead ahead of Kris Khan and Leo Labarbera, but the caution would come out as three-wide between David Rockwood, Matt Langford, and Willow Barberstock would see Barberstock go around heading into turn one.

The restart would not go Givens’ way as he’d slow with an issue, but was able to get it back going. At the front, Khan was able to get by Hils with Finnegan third ahead of Morris, as Labarbera and Soloman battled for fifth ahead of Ramsay, Boyes, and Mercer. Morris would get alongside Finnegan for third on Lap 7, completing the pass a lap later.

Soloman ran fifth behind them ahead of Ramsay, Labarbera, Boyes, Mercer, and Shilling. Klumper would get alongside Shilling for 10th at Lap 11, with Wilman side-by-side with Jo Lawrence for 12th. Klumper got the spot a lap later ahead of Shilling, with Wilman clearing Lawrence a lap later.

Closer to the front, Morris was able to get alongside Hils for second on Lap 15, as Soloman slid sideways through turns one and two, thanks to contact from Courtney Scott. Finnegan continued to run fourth, with Ramsay and Soloman side-by-side for fifth. Ramsay got the spot on Lap 17 ahead of Soloman, with Labarbera close behind as Scott headed pit side.

Morris would work at tracking down Khan for the lead, getting alongside him after a couple attempts. There’d be contact along the way back and forth between them, with Khan able to hold onto the top spot as Morris slid back a couple spots. He’d then slow with additional issues, heading pit side on Lap 32.

Through the process, Ramsay was able to get by Hils to move himself into second, as he became the next driver to track down Khan for the lead. The pair would go back and forth over the final five laps, trading bumps back and forth as they tried to outsmart each other. Khan ultimately took the checkered flag ahead of Ramsay, but both drivers were disqualified post-race.