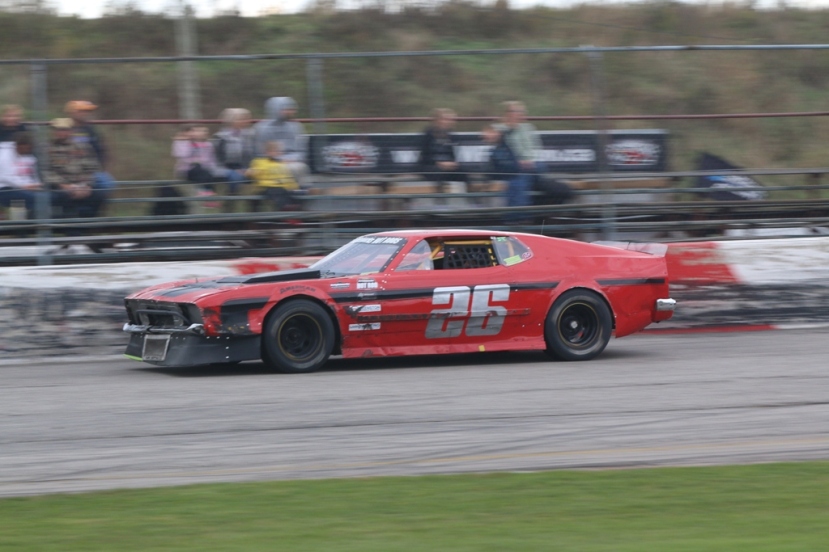 The decision for Martin to bring the mustang out was simple – his loyalty to the brand.

“I’ve been a ford guy my life,” he commented pre-season. “We were in need of a body to put on the chassis. So one day my dad came across it, and we decided pretty quick to go pick it up. We were hoping to be the only mustang and one of few Fords out there. We wanted to be different then everyone else, something that could stand out in a full field of amazing looking cars.”

While the appearance of the car certainly caught several eyes, the speed would cause the rest of the crowd to also take notice. Despite the opening weekend’s feature getting rained out at Sunset Speedway, Martin put together a solid debut by winning one of his qualifying heat races.

The speed followed him to the half-mile Jukasa Motor Speedway a couple weeks later, as he battled inside the top-five through the first half of the event en route to finishing seventh. He kept the momentum going, battling up front through the feature to place fifth.

He started off strong at Peterborough Speedway with a heat victory, but ultimately was caught up in a mid-race accident, causing him to climb the wall and end his night early. The bad luck followed him to Sunset at the end of July, as he was caught up in a couple different accidents en route to finishing 10th.

Martin would take some time off to get his program back sorted together correctly, returning to the series at the end of August at Jukasa. The time off paid off as he ran inside the top-five, until he was one of several to suffer damage in the multi-car wreck midway through. He would rebound to finish ninth.

After a rough pair of heats to start the Fall Velocity at Sunset, Martin would score another top-10 finish with an eighth. He started off strong at Frostoberfest at Flamboro with a heat victory, though ultimately was caught up in some contact mid-race, fading back to finish 11th.

Despite having some rough luck at times, Martin has already shown that he will be someone to contend with for feature victories in the future.

On behalf of OSCAAR, congratulations Dalen on your success in 2019. We look forward to seeing the mustang back on-track next season.