Following a great season of competition across the province, everybody came together for the short track year-end playoffs. With each track hosting a big event, a lot of talent was showcased with the cream rising to the crop, as familiar faces found their way to victory lane. It also did not go as smoothly as warranted for everybody, though, as some drivers suffered bad luck along the way.

After a week to digest the four thrilling weeks of racing, each of the five panel members were asked to send in 10 drivers that caught their attention through these events. The 10 competitors who received the most mentions are below, listed in alphabetical order, for you to read through.

Did we include the right 10 drivers? Who did we forget about?

He then traveled to Flamboro Speedway. laying down the quickest lap in time trials. He looked to be headed towards victory in the first feature when he would spin around in someone else’s fluid, backing the No. 35 Honda Civic into the turn one/two wall. Restarting 16th with 25 laps to go, he would drive his way back to a runner-up finish. He then scored a dominating victory in the second feature, but lost the overall victory in a tie-breaker to Karl Sault.

Kamrath showed speed at Peterborough Speedway, though went through a slew of mechanical issues. He blew the motor in practice on Friday, changed the head gasket to only have an oil line go while leading his qualifying heat on Saturday. He made his way from tail of the field (27th) to sixth on Sunday in 17 laps, only to have fuel pick-up issues take him out of contention.

Bobby Tolton began his playoffs at Full Throttle Motor Speedway, crossing the finish line in ninth, though was bumped up to eighth virtue of a post-race disqualification.

It seemed the No. 13 hit it’s stride when it hit Peterborough Speedway, with Cayden Lapcevich scoring the Younggun Showcase victory behind the wheel. Tolton kept the good times rolling, finishing top-three in both of his qualifying heats before battling up front all feature long en route to a third-place finish.

Cory Young ran strong through his heats at Sunset Speedway with a pair of runner-up finishes, and ran in the top-five throughout the 35-lap feature en route to finishing fifth.

He then backed it up with a runner-up finish at Full Throttle Motor Speedway a week later.

He would run inside the top-10 throughout the first feature at Flamboro Speedway en route to a ninth-place finish. Starting 10th in the second feature, he battled within the top-10 once again en route to finishing seventh. He would be credited with an eighth-place finish overall.

Eric Yorke came out strong at Sunset Speedway, winning both of his qualifying heats to be the top qualifier for the event. Starting sixth after the invert, he would make his way to second by the 10th lap. He would try to reel in eventual race winner Kamrath, but was unable to, crossing the finish line in second. 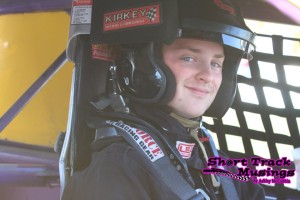 Qualifying 19th at Flamboro Speedway, he would battle his way to a 19th-place finish. He would start second for the second feature following the invert, leading eight laps en route to finishing ninth. He would be credited with a 12th-place finish overall.

He carried the momentum to Peterborough Speedway, leading the first half of the Younggun Mini Stock Showcase en route to a runner-up finish. He then won both of his qualifying heats to start on pole, and fought through a couple incidents to finish 11th in the 50-lap feature.

Kicking off his playoff run at Flamboro Speedway, Jake Watson qualified eighth for the first feature, working his way forward to finish fourth. Starting 16th in the second feature, he fought back from a significant hit mid-race in the turn four wall following contact with a fellow competitor to finish fifth. He would be credited with third overall.

Laying down the fourth quickest lap in qualifying, Karl Sault would take over the lead on Lap 25 when Kamrath went for the spin, holding off the field the rest of the way for the victory in the first feature. Starting 19th in the second feature, he moved up into the runner-up spot with 13 laps to go, and challenged Kamrath on a late-race restart, ultimately crossing the finish line in second. Though due to having the better finish in the first feature (1st), he would be declared the overall 2019 Frostoberfest Champion in the tiebreaker.

Qualifying third for the first feature at Flamboro Speedway, he battled inside the top-five all race long en route to finishing third. Starting 17th for the second feature, he would get caught up in a late-race incident with six laps to go. He would rebound to finish 10th, getting fifth in the overall results.

Nolan Gould was fast through qualifying at Peterborough Speedway, finishing second and first in his heats, allowing him to start second for the feature. However, the first lap would not go to his liking as contact would result in him taking a slide through the grass. He gathered it back 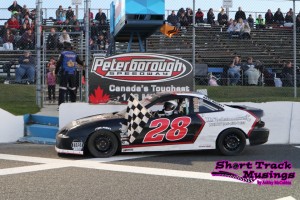 up without a caution, scored 13th as of Lap 2. He began to make his way forward, moving into second following a restart at Lap 28. He would challenge his teammate for the victory on a late-race restart, though ultimately crossed the finish line in second.

Ryan Oosterholt would finish second in both of his qualifying heats, allowing him to start fourth for the feature. He would waste no time making his way forward, taking the lead on a Lap 9 restart. He then led

the rest of the way, holding off challenges from the likes of Warren Paxton and Gould en route to winning the 2019 Autumn Colours Classic.

Kevin Bridge would post the eighth quickest lap at Flamboro Speedway, though forgot to roll across the scales immediately following, resulting in his time being disallowed. Starting last in the b-main, he would make his way through the field to score the victory.