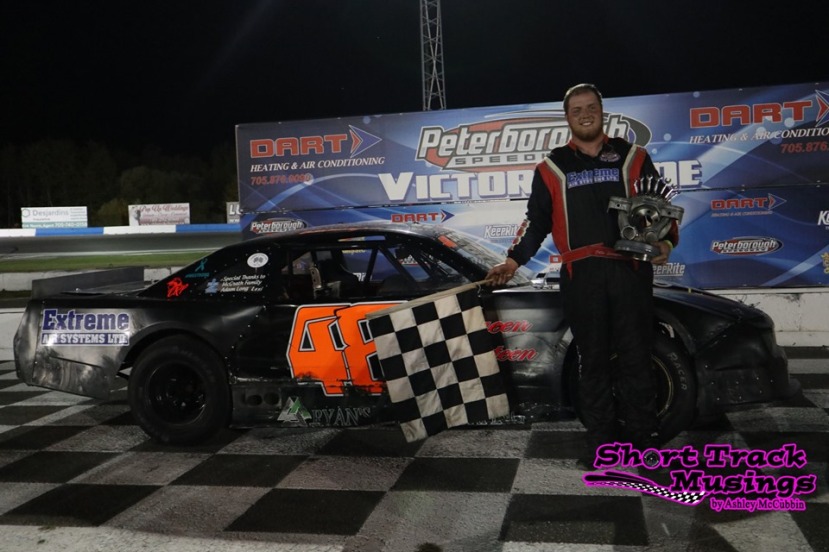 It was a pair of returning faces to Younggun Showcase victory lane on Friday night at Peterborough Speedway’s Autumn Colours Classic, with Cayden Lapcevich and Coltin Everingham taking top honors.

Behind the wheel of Bobby Tolton’s entry, Cayden Lapcevich made his way through the field, tracking down and passing Issac Dippel in the closing laps to win the mini stock event. It marks Lapcevich’s second crown after winning the Mini Stock event in 2016 driving Donovan Price’s car. Gil Brooks finished third, followed by the 70 and Chandler Bos.

The Super Stock event would see Coltin Everingham take the advantage mid-race, cruising en route to victory. it marks Everingham’s third time winning the event, as he won the Super Stock edition in 2018, along with the Mini Stock running in 2017. Marlie Owen finished second, followed by Treyten Lapcevich, Tyler Bouillon, and Ethan Constable.

Justin Collison was in the runner-up spot on Lap 17, until getting sideways while battling Dustyn Mombourquette and sliding up to the wall, spinning on top of it before landing. He would be okay, with the damage able to be repaired before Saturday’s racing action. 2016 winner Lane Zardo showed speed initially, but fell back through the middle portion of the event.