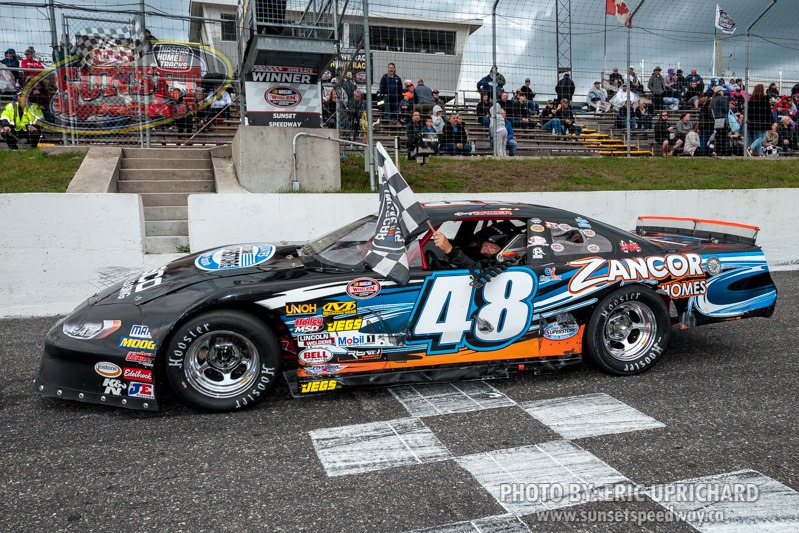 Showing speed from the drop of the green flag, Dwayne Baker was able to put together a commanding performance in the first Sauble Falls Tent and Trailer Parks Late Model feature on Saturday night.

Dwayne Baker grabbed the initial advantage ahead of Shepherd, Thayne Hallyburton, and Travis Hallyburton, as Benedict and Spencer-Walt ran side-by-side for fifth ahead of Geniole, Wilkinson, Montanari, Adams, and Sikes. Spencer-Walt would get the fifth spot on Lap 5, with Geniole next to challenge Benedict. Wilkinson continued to run eighth ahead of Montanari, Adams, Sikes, Inglis, and Feeney. Feeney would get alongside Inglis for 12th, but the caution came out on Lap 10 for Geniole spinning Spencer-Walt in turn four. 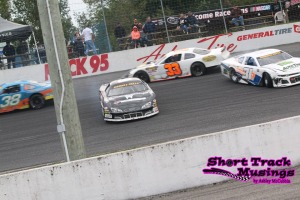 The first attempt at a restart produced the third caution as Spencer-Walt stalled down the backstretch.

The second attempt went cleanly with Baker holding serve ahead of Shepherd, Travis Hallyburton and Wilkinson, as Thayne Hallyburton and Benedict battled for fifth. Benedict got fifth on Lap 14 ahead of Thayne, with Adams running seventh as Inglis and Geniole battled for eighth ahead of Sikes. Geniole would get the spot on Lap 16.

Benedict looked to continue moving forward, getting alongside Wilkinson for fourth on Lap 17, as Thayne ran sixth ahead of Adams, Geniole, Inglis, and Sikes, with Feeney and Montanari side-by-side for 11th. Adams would get alongside Thayne for sixth on Lap 20, completing the pass a lap later as Inglis got alongside Geniole for eighth. Behind them, Sikes ran 10th ahead of Feeney and Montanari, with McIssac and Semeraro side-by-side for 13th.

Geniole moved into eighth on Lap 24 ahead of Inglis, with Feeney alongside Sikes for 10th a lap later. Benedict would take the sixth spot on Lap 26 ahead of Wilkinson, Adams, Thayne, Geniole, and Inglis, with Sikes holding off the challenge.

The caution would then come out on Lap 30 for rain. With a continued drizzle, officials would elect to call the race five laps short of the distance to get the Bone Stocks on-track with their treaded tires to keep the warmth in the surface.