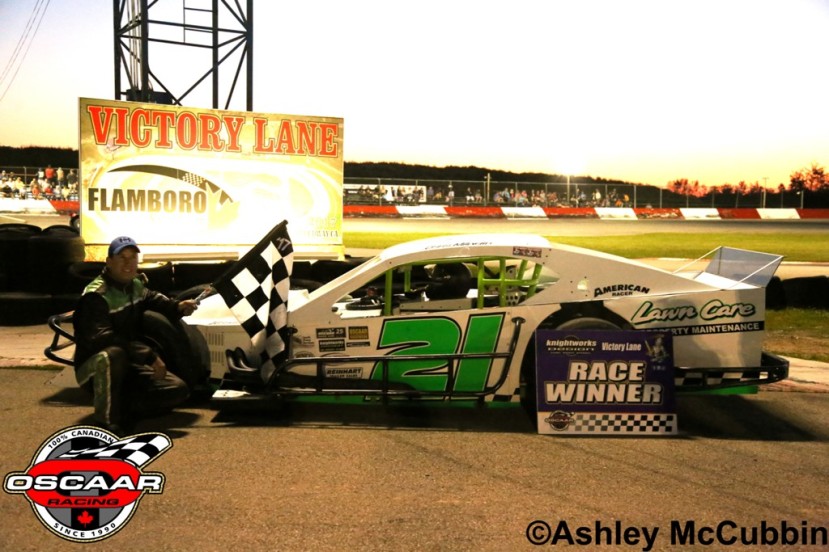 After taking the lead on a restart at the halfway mark, Chris Milwain led the rest of the way en route to his second OSCAAR Modified feature victory of 2017.

Emms jumped out to the early lead ahead of Elliott, Horner, Hodgkinson and McLean, with Gignac and Milwain side-by-side for sixth. Gignac got the spot on Lap 4 ahead of Milwain and Harper, before the caution waved on Lap 6 for McLean spinning in turn two. 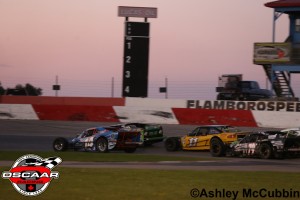 Elliott got the jump on the restart to take the lead ahead of Emms, Hodgkinson, Milwain, Horner and Gignac. Harper ran seventh with Reinhart and Tolton side-by-side for eighth. The caution would wave again, though, with McLean spinning this time in turn two.

Emms got the jump on the restart this time around with Milwain jumping up into second ahead of Elliott, Gignac, Tolton and Hayward. Hodgkinson ran seventh with a 1/3 of the laps complete ahead of Horner, Monette, Harper, Reinhart and Cornell. McLean would get alongside Hagen for 13th at Lap 13, but the caution flew a lap later as a result of Harper and Reinhart getting together in turns three and four.

The restart saw a battle for the lead between Emms and Milwain, with Milwain taking the top spot on Lap 15 ahead of Emms, Gignac Elliott, Hayward and Hodgkinson as McLean pulled off the track. With 17 laps on the board, Horner ran seventh ahead of Cornell, as Tolton and Reinhart ran side-by-side for ninth. Reinhart got the spot on Lap 18, bringing Monette through with him to bump Tolton back to 11th ahead of Harper.

The battles continued, with Reinhart and Monette both slipping past Cornell on Lap 21 ahead of Tolton, Harper, Hagen and Schrenk.

Chris Milwain led the rest of the way to pick up his second victory of 2017, followed by AJ Emms with his sixth top-five in six races. Luke Gignac finished third for his fifth top-five, followed by Gary Elliott in fourth for his third top-five. Ken Hayward rounded out the top-five in his OSCAAR debut.