PETERBOROUGH, Ontario — There may have been some contact along the way, but it is being dubbed as the feature of the year with how hard the front runners dueled for the glory. Ultimately, it was Shawn Chenoweth taking home the crown with the Autumn Colours Classic victory at Peterborough Speedway. 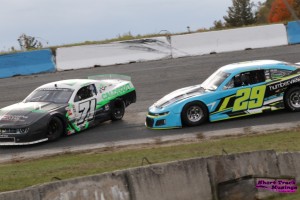 Feeney got alongside Boundy for sixth on Lap 6, with Chenoweth alongside Davenport for second a lap later. Chenoweth got the spot before the first caution came out on Lap 9 for Pepper spinning Wilson in turns three and four. With 42 laps to go, Zardo led Chenoweth, Davenport, Hawn, Spencer-Walt, Feeney, Boundy, Owen, Johnny Morrison, Ryden Lapcevich, Jeremy Dobb, Paul Maltese, Rob Richards, Wilson, and Feeney. The first attempt at a restart produced the second yellow flag, for an incident involving Dobb and Lapcevich.

The second attempt was clean, with Zardo leading Chenoweth, Davenport, Spencer-Walt, Feeney, Hawn, Boundy, Morrison, Owen, Dobb, Pepper, Lapcevich, Wilson, Maltese, and Richards. Chenoweth took over the top spot on Lap 15, with Spencer-Walt tagging Davenport. The tag would not do the trick, as Davenport kept third. Further back, Owen got by Morrison for eighth, with Pepper and Lapcevich both getting by Dobb for 10th.

Spencer-Walt challenged Davenport once again for third on Lap 21, as Owen and Morrison both got by Boundy to move up to seventh and eighth, respectively. Spencer-Walt got the third spot on Lap 23, with Feeney tagging the back of Davenport. It was not enough, as Davenport kept fourth in front of Feeney, Hawn, Owen, Morrison, Pepper, Lapcevich, Boundy, Maltese, Wilson, Dobb, and Richards.

Wilson then got by Maltese for 12th on Lap 28, with Owen by Hawn for sixth five laps later. The second caution then came out on Lap 38 for Pepper going around on the backstretch. Under the yellow flag, Spencer-Walt gave up third for a trip down pit road with a flat tire; Morrison also came down pit road.

The restart saw Richards, Boundy, and Pepper go three-wide, which did not work out, resulting in contact from Pepper to Boundy, and Boundy into Lapcevich, with Lapcevich into the outside turn three wall.

The second attempt saw Zardo get into Chenoweth, with the pair side-by-side for the lead, including more contact on Lap 40. It’d cause a ripple effect through the field, with multiple cars spinning off turn two including Owen, Wilson, Maltese, and Dobb. With 11 laps to go, Zardo led Chenoweth, Davenport, Feeney, Pepper, Spencer-Walt, Hawn, Wilson, Morrison, Dobb, Boundy, Owen, and Maltese.

Zardo got a good restart in front of Chenoweth, Davenport, Feeney, Pepper, and Spencer-Walt, but the yellow flag also returned, courtesy of Boundy going around on the frontstretch. Chenoweth grabbed the lead on the restart, as Zardo slowed with a mechanical issue, drawing the seventh caution. Spencer-Walt got into Chenoweth on the ensuing restart to take the lead, but also saw another yellow flag, courtesy of Hawn and Morrison going around after running three-wide with Feeney.

Shawn Chenoweth returned the favor on the restart, taking back the lead and pacing the field the rest of the way for the win. Rick Spencer-Walt finished second, followed by Todd Davenport, Paul Pepper, and Brian Wilson.