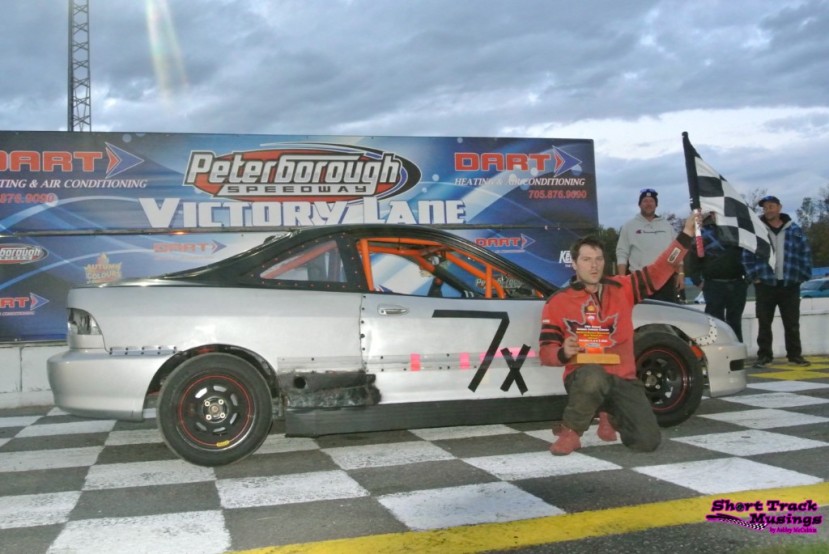 PETERBOROUGH, Ontario — Taking the lead on Lap 7, James Townsend led the rest of the way en route to winning the Melissa Bullen Memorial 67 as part of the Autumn Colours Classic at Peterborough Speedway.

Josh Bullen grabbed the early advantage in front of James Townsend, as Nolan Gould and Chandler Bos battled for second. The caution came out on the second lap, though, for Tom Eckenswiller going around in turn four, as Phil Givens took a trip through the frontstretch grass. The first attempt at a restart produced the second yellow flag as Rob Harrison got into the turn four wall.

The second attempt was clean, however Bos gave up his position inside the top-five for a trip down pit road. Bullen held serve, leading Townsend, Bobby Mercer, Johnny Paradzinski, Shawn Taylor, and Nolan Gould. Townsend got alongside Bullen for the lead on Lap 5, completing the pass two laps later, as Mercer continued to run third in front of Paradzinski, Taylor, Gould, Shawn Solomon, Ryan Babin, and John Lavalle, as Givens headed down pit road on Lap 9.

Kyle Fetterly ran 10th in front of Wayde Thorne, with Coleridge Phinnemore and Brock Baker side-by-side. Phinnemore got the spot on Lap 11, with Kyle Neumeister heading down pit road. Paradzinski took over third on Lap 14, with Taylor following him through a lap later, as Mercer and Gould rounded out the top-six.

With 16 laps on the board, Townsend led Bullen, Paradzinski, Taylor, Mercer, and Gould. Gould got by Mercer for fifth on Lap 18, as Givens took another trip down pit road. The caution came out a lap later for Babin climbing the backstretch wall. With 49 laps to go, Townsend led Bullen, Paradzinski, Taylor, Gould, Mercer, Solomon, Thorne, Fetterly, Rob Crick, Phinnemore, and Baker.

The shuffling continued, with Nelson by Thorne for ninth, with Solomon heading down pit road on Lap 29. Fetterly now ran seventh in front of Nelson, Thorne, Eckenswiller, Sault, Baker, and Phinnemore. Paradzinski took over second on Lap 31, bringing Gould through with him, as Bullen tagged Taylor. Taylor got the fourth spot five laps later, with Bullen fifth in front of Mercer, Fetterly, Nelson, Thorne, Sault, Crick, and Phinnemore. Bullen’s feature hit a low when he spun on the backstretch for the caution at Lap 47.

Townsend held serve in front of Gould, Taylor, Paradzinski, Mercer, Fetterly, Sault, Bullen, Thorne, and Vanderbelt. Bullen continued to make up lost ground, passing Sault for seventh on Lap 52, only to lose the spot back on the last lap.