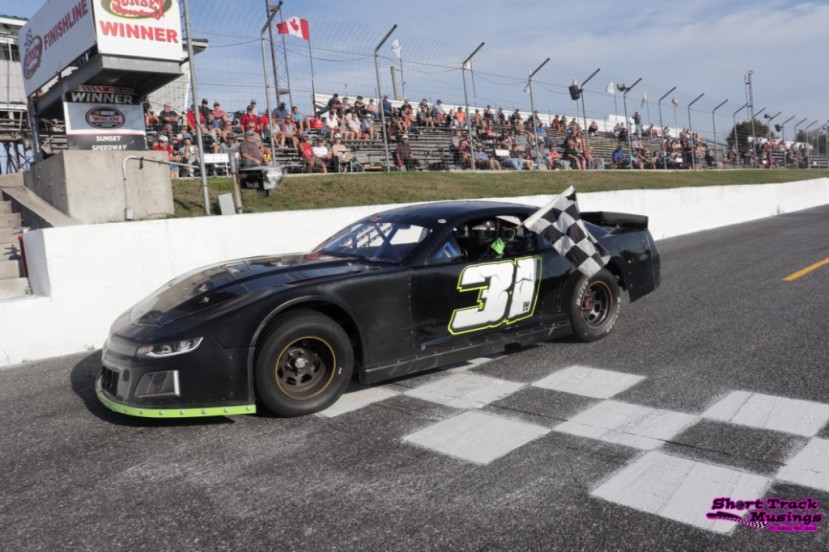 INNISFIL, Ontario — With Jake Spencer-Walt preparing for the next step of his racing career, Spencer-Walt Motorsports purchased a super stock for the 2023 campaign, with the game plan for lots of testing prior to competition.

With a new car in the shop, the question was asked from Rick Spencer-Walt to Jake if he could borrow the car for the weekend. Jake said that was fine, with one condition – only if you win.

This past Saturday night at Sunset Speedway, Rick Spencer-Walt lived up to his end of the bargain, driving through the field en route to scoring the feature victory.

The night began well, as he turned a front row starting spot in the first heat into a trip to victory lane. The invert for the second qualifier did not faze him, either, as evident by a runner-up finish.

Starting tail of the field for the 30-lap feature, he battled just inside the top-10 in the early laps, before moving his way forward to run fifth with just 10 laps on the board. He used a restart at the halfway mark to move up to third, before taking advantage on the next restart at Lap 18 to take over the lead following a battle with 2022 track champion Gerrit Tiemersma.

Spencer-Walt will be back behind the wheel of the Super Stock at Fall Velocity, thanks to sponsorship from ImageWraps.ca and Great Lakes Concrete.