MILLGROVE, Ontario — A slightly different format with heat racing for three of the divisions, combined with a visit from the Ontario Pro Sprints made for a fun, entertaining night of racing at Flamboro Speedway on Saturday.

Lisa Hamacher was victorious in the second qualifier ahead of Ryan Battalina, Kevin Taylor, Ryan Brown, and Lennie Hill.

Ryan Battilana was victorious in the final qualifier ahead of Brown, Lisa Hamacher, Taylor, and Hill.

Come feature time, Adrian Kemps worked his way forward quickly in the feature, taking the top spot on Lap 3. From there on, he would pace the remaining 22 laps en route to scoring the victory in front of Ashley Bender, Ryan Wardell, Tyler Cullen, and Mark Hamacher. Shawn Hie placed sixth, followed by Kevin Taylor. A bunch of drivers unfortunately failed to finish including Lisa Hamacher, Ryan Battalina, Ryan Brown, and Lennie Hill.

Notably, Logan Chapman failed to take the green in either heat or the feature.

Coming back from a crash a couple weeks ago, Mike Westwood proved he can still get the job done, winning the first Canadian Vintage Modified feature in front of Mike Podd, TJ Marshall, Scott Tonelli, Jae Pepin, and Rob Twitchett. A couple drivers failed to finish following incidents including Quintin Murdoch, Ricky Willigar, and Steve Murdoch.

The second feature saw a familiar face reign at the front, with TJ Marshall taking the lead on Lap 2 and leading the rest of the way en route to victory. Quintin Murdoch rebounded for second, followed by Scott Tonelli, Jae Pepin, Rob Twitchett, and Mike Westwood. Mike Podd failed to finish this time around, while Ricky Willigar and Steve Murdoch did not take the green flag.

Mike Thomson won the first heat for the Mini Stocks in front of Kaitlyn Wallace, Shawn Taylor, Mike Hooper, Michael Kenny, and Dustin Goodfellow, while Bobby Mercer and Kyle Istead did not finish. Gilmour would not take the green flag.

Michael Kenny was victorious in the second qualifier ahead of Taylor, Thomson, Wallace, and Hooper. Goodfellow and Mercer did not finish, while Gilmour and Istead did not take the green flag.

Come feature time, Shawn Taylor methodically worked his way forward, finding himself in the runner-up position on Lap 33. He would then take lead a lap later, pacing the final six laps en route to victory. Mike Thomson’s consistency continued with a runner-up, followed by Michael Kenny and Mike Gilmour. Dustin Goodfellow and Bobby Mercer failed to finish, while Kyle Istead did not take the green flag. Kaitlyn Wallace and Mike Hooper were both disqualified following an incident on the backstretch.

Gillian Hils was victorious in the second qualifier ahead of Rogers, Wheller, Riddell, Labarbera, Alex Stewart, Eric Stewart, and Caroline Kelly, while Cameron Thomson did not finish.

Cameron Thomson made up for that in the feature, though, taking the lead with eight laps to go to score the victory. Eric Stewart was second after pacing the most laps in front of Alex Stewart, Leo Labarbera, Spencer Riddell, Chance Rogers, and Gillian Hils. Caroline Kelly and Andy Wheller failed to finish

Congratulations to Brad Fletcher for winning the Spectator Drags King of the Hill with his 2018 Voltzwagen Golf. 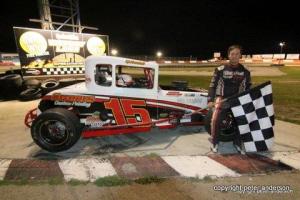 Thanks to Derek Smith (http://www.racepulse.com), Peter Anderson (pandersonphotos@gmail.com), and Zoompics.com for their images of the racing action each week.

Thanks to Ingrid Hartman for filming each week. Be sure to check out her videos at https://www.youtube.com/user/petalpower51/videos.

The next event at Flamboro Speedway is scheduled for Saturday, August 20, highlighted by T.Q. Can-Am Midgets with their fourth appearance of 2022. They will be joined by the Pro Late Models, Canadian Vintage Modifieds, Mini Stocks, and Pure Stocks.