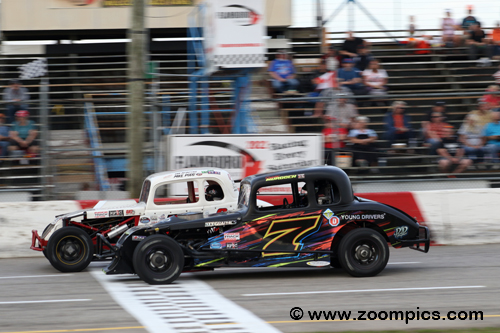 MILLGROVE, Ontario — Despite being faced with some adversity on Saturday night at Flamboro Speedway, Quintin Murdoch kept his consistent season rolling.

Starting fifth for the first feature, Murdoch attempted to work his way forward, avoiding the first lap incident which took out some of his competitors, and making moves to run as high as third on Lap 14. Ultimately, though, he’d come up short in the battle for position, crossing the finish line in fourth.

He’d line up on the front row for the second 20-lap affair, hopeful of another checkered flag. He would take the top spot on Lap 6 and led through the next 10 laps, before fading back in the late stages to place fourth.

Through seven races this season, Murdoch has only scored one finish worse than fourth.

Murdoch Motorsports is proud to be supported by Young Drivers of Canada – Orangeville, Shelburne and Mount Forrest, and DJD Graphics for the 2022 season.

Keep up with Murdoch Motorsports all year long at https://www.facebook.com/MurdochMotorsports.

By: Ashley McCubbin / AM Marketing – ashleymccubbin17@gmail.com.