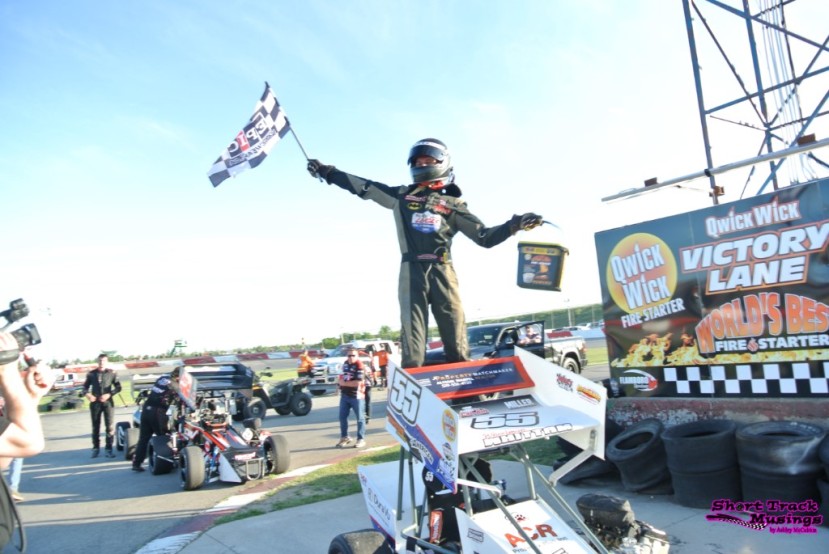 MILLGROVE, Ontario — Using a mid-race restart to his advantage, Cory Whittam took the top spot in the Qwick Wick Can-Am Midget feature and did not look back en route to scoring the victory.

The race started off with a yellow flag, with Rickwood driving up on the left rear wheel of Blackburn, causing him to go for a couple spins on the backstretch. Blackburn’s day would unfortunately be over as a result. Daniel Hawn would grab the advantage on the restart ahead of Whittam, Miller, March, Pitchell, Harrison, and Stanley. However, another caution came out on Lap 4 for Polillo spinning in turn four.

Hawn got another good restart ahead of Whittam, Miller, and March, with Whelan jumping up to fifth in front of Harrison. The shuffling continued, with Stanley getting by Harrison for sixth on Lap 7, only to be passed back a lap alter as Pitchell ran eighth in front of Riddell, March, Polillo, Bailey, and Rickwood. Stanley would get another crack at Harrison, getting back by him once again on Lap 14, with the yellow flag coming out a lap later for Harrison going around on the backstretch.

The restart was exactly what Cory Whittam ordered, as he was able to grab the advantage ahead of Hawn, Miller, March, Stanley, and Whelan. Stanley then got alongside March for fourth on Lap 18, with the caution coming out a lap later for Polillo going around after battling for position with Harrison.

Another restart played out perfectly for Whittam ahead of Hawn and Miller, with March and Stanley side-by-side for fourth in front of Whelan. Stanley got the spot on Lap 21, bringing Riddell through with him. The race was not over, though, with another yellow flag for March slowing on the frontstretch with two laps to go.