The second generation star got to call himself a winner on Saturday night at Sunset Speedway, as Dustyn Mombourquette scored the victory in the Limited Late Model feature. 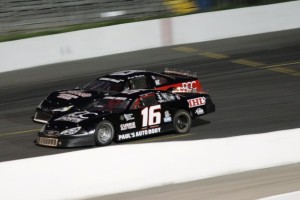 Mombourquette grabbed the initial advantage over Maltese, with Adams and Tyson side-by-side for third in front of Montanari and Inglis. Adams grabbed the spot on Lap 3, but was forced down pit road a lap later with a mechanical problem.

The field seemingly spread out around the 3/8-mile oval, and it looked to have a green flag appearance until Inglis stopped with an issue for the yellow flag at Lap 14.

The restart saw Maltese challenge Mombourquette for the top spot on his bumper, though eventually fade back. This opened the door for Tyson over the run, who made the move for second on Lap 28.