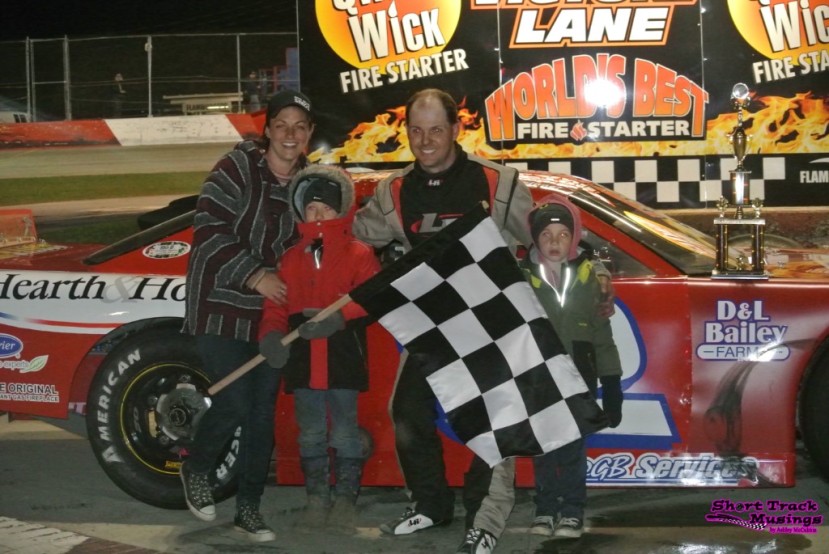 MILLGROVE, Ontario — As much as some things may change, others remain the same. There has certainly been some changes ahead of the 50th season at Flamboro Speedway, but drivers who know how to win always rise to the top.

That was the case on Saturday night when it came to the track’s season opener. 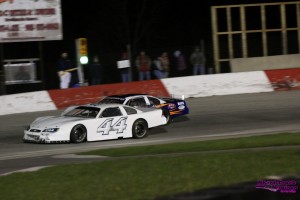 Steve Laking would grab the advantage off the drop of the green flag, holding serve over Mark Burbridge and Kevin Albers. However, the caution flew on Lap 1 for Logan White getting into the turn three wall. Under the yellow, Laking made his way to pit road.

Albers inherited the lead, holding serve on the restart ahead of Burbridge, Ty Cavallin, Trevor Thompson, Laking, Kevin Gallant, and Shawn McGlynn. The advantage did not last, though, with Burbridge sneaking underneath Albers for the top spot on Lap 6, as Laking passed Thompson for third a lap later.

The second half of the event did not go as some drivers envisioned, with McGlynn pulling into the infield on Lap 36 with mechanical issues, and Cavallin spinning in turn three with eight laps to go for the yellow flag.

Mark Burbridge got a good restart, keeping himself in front of a hard charging Kevin Albers to score the victory with Steve Laking placing third followed by Trevor Thompson and Ty Cavallin. Kevin Gallant finished sixth, followed by Shawn McGlynn and Logan While, while Chris Howse and Rick Burbridge failed to take the green flag. 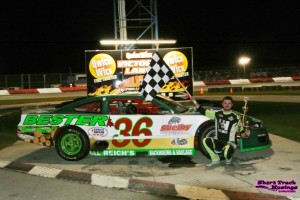 Randy Rusnell and Justin Collison led the field to green, with Rusnell grabbing the early advantage as Carson Nagy slipped into second in front of Collison as Roy Wilkie rode the backstretch wall. Although Nagy showed speed, he was consistently loose off of turn two, which opened the door for Zardo take the spot on Lap 12.

It looked as though Rusnell may have the victory in hand, however the motor began popping down the backstretch at Lap 30, allowing Zardo to quickly close the gap. Zardo would make his move two laps later, taking over the top spot.

Lane Zardo held onto the score the victory, while Randy Rusnell was able to survive his mechanical gremlins for a runner-up. Roy Wilkie came back from his wall-ride to make a late-race pass for third over Carson Nagy, with Justin Collison rounding out the top-five. Chase Pinsonneault finished sixth, followed by Chad Corcoran and Steve Cashmore. 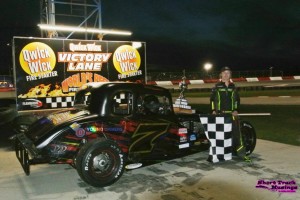 The feature got off to a rough note for the open-wheel superstars, with Robbie Guy going for a spin coming to the green flag. Ricky Willigar grabbed the advantage on the restart ahead of TJ Marshall, Quintin Murdoch, Mike Podd, and Rodney Rutherford. The race was slowed once again, though, as a result of debris on Lap 5.

Willigar got another good restart, with Murdoch getting by Marshall to grab second as Rutherford moved into fourth ahead of Podd and Steve Murdoch. Quintin Murdoch would make his move for the lead off of turn four on Lap 8, taking the top spot a lap later.

The race looked to be spread out, headed for a clean night, with chaos broke out on Lap 21. Guy would go up in smoke through turns one and two, with Joe Arsenault sliding into the fluid up into the outside turn one wall.

Quintin Murdoch got a good restart, pacing the field the rest of the way en route to victory over Ricky Willigar and TJ Marshall. Rodney Rutherford and Mike Podd rounded out the top-five despite going up the track a little on the restart, followed by Steve Murdoch, Scott Tonelli, Adam Ross, Joe Pepin, Joe Arsenault, and Robbie Guy. 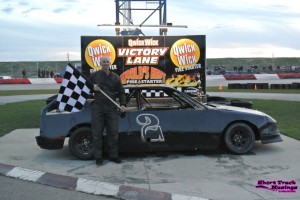 Cole Quinton led the first lap of the Mini Stock feature, but it’d Bobby Mercer making the move to grab the lead on Lap 2. Shawn Taylor and Chris Pendlebury both got by the No. 18 Mustang over the next couple laps, but Quinton fought back to get back by Pendlebury on Lap 10.

At the front of the field, Bobby Mercer could not be caught as he drove away from the field, winning by a full straightaway ahead of Shawn Taylor, Cole Quinton, Chris Pendlebury, and Mike Thompson. Mike Hooper and Roland Goodfellow followed, while Kaitlyn Wallace failed to finish, pulling off on Lap 13 with mechanical issues. Cole Burrows did not take the green flag.

A trio of ladies led the field to green for the Pure Stocks with Courtney Scott and Reece Bourgeois on the front row. Bourgeous grabbed the early advantage ahead of Scott, as Gillian Hils and Jo Lawrence battled for third, with Craig Cole alongside Kris Lawrence for fifth.

Jo Lawrence easily made the pass for third, moving into second on Lap 4, with Hils trying to follow suit by Scott. She was unable to, with Kris Lawrence and Cole taking her three-wide for fourth. Cole then got alongside Scott for third on Lap 6, completing the pass and bringing Hils, Lawrence and Wayde Thorne through with him. 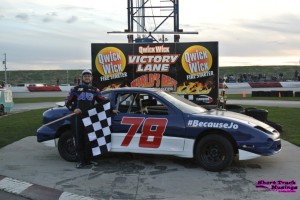 Jo Lawrence would track down Bourgeois for the lead, taking over the top spot on Lap 10, with Cole getting by for second four laps later as they went by the lapped car of Mark Allan.

Thanks to Derek Smith (http://www.racepulse.com), Peter Anderson (pandersonphotos@gmail.com), and Shaun Lumley (Zoompics.com) for their images of the racing action each week.

Thanks to Ingrid Hartman for filming each week. Be sure to check out her videos at https://www.youtube.com/user/petalpower51/videos.

The next event at Flamboro Speedway is scheduled for Saturday, May 7, with the Qwick Wick T.Q. Can-Am Midgets season opener headlining the show. The night will also include the Pro Late Models, Super Stocks, Mini Stocks, and Pure Stocks. The gates open at 5pm, with racing starting at 6:30pm.