When the fans and fellow competitors were asked about the Pure Stock class, there were ultimately over 70 names that came up throughout the discussions – bringing us to this point. Each of those drivers have been ranked, with their final position on the list being determined based on a combination of fan votes, fellow competitor votes, and last year’s success.

2022 Plans: Running Peterborough Speedway full time and possibly traveling to other tracks. Depending on how my season is going at Peterborough.
2022 Goals: Win at least 1 feature race and contend for the 2022 championship
Drivers to Watch: I’m keeping an eye on Kyle Novis, Steve Finnegan, Jake Kelly, Sean Kennedy and Ang Novis who has come along way since he started racing just a few years ago.
Most Memorable Moment: Winning the Renagade Truck Championship in 2019 with team mate Nick Ledson as well as winning a few endurance races in 2011

Known for his ability in the mini stock division, Brad Lavalle also surfaced during the pure stock conversation in knowing how the family likes to run a variety of cars and divisions.

Nathan Rhea did not rank as high as Cox last season, ultimately placing 19th in the Delaware Speedway standings, with four top-five’s and seven top-10’s, highlighted by a trip to victory lane.

Racing at Flamboro Speedway in 2022 sharing a ride with his sister, Chase Mitchell scored six top-10 finishes, including a season-best fourth.

2022 Plans: Run as much as possible at different tracks, but nothing set in stone as of yet; we still need to look at all the track schedules to make our final decisions.
2022 Goals: Try to find new set ups to get faster times out of my car and enjoy racing at the multiple tracks.
Drivers to Watch: Phil Givens, Jordan Morris, Leo Labarbera, Kyle Lucas and of course my teammate Reece Bourgeois.
Most Memorable Moment: Running at frostoberfest, heading into the main feature having the second fastest time over the 43 cars. I was shocked with how many amazing talented drivers that came to race that day. It was by far the best and most fun racing of the whole season. Lots of milestones made in my rookie year. Looking forward to the 2022 race season.

Obviously capping off the year with a great highlight, Rick VanKleef proved himself behind the wheel as a rookie. He picked up three top-10 finishes, including a season-best fourth. He also showed speed in his appearances at Sunset Speedway and Grand Bend Speedway. 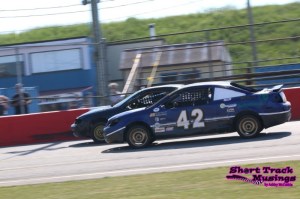 Another regular at Flamboro Speedway, the past division champion scored a pair of top-five’s and eight top-10’s over the course of 2021.

2022 Plans: Travelling a lot this season until our full time points run at Sauble Speedway starts. We have a rental car for Flamboro as well; I’m looking forward to having some people jump into.
2022 Goals: To get our two developmental drivers Alex Stewart and Cameron Thomson up running at the front. This class has taken off with talent and any wins our team can get this year will be special.
Drivers to Watch: 3.James Houghton, Cameron Thompson, Nicole Stewart, Reece Bourgeois, and of course Phil Givens
Most Memorable Moment: Hard to narrow it down but probably my first win in 2013 when I made a crossover pass at two to go after I almost threw away the win on a restart.

The Flamboro Speedway regulars are dominating this section of the list, as Wayde Thorne is one of those whom can hold his own against the rest of the field. He picked up six top-five’s and seven top-10’s.

Switching back to our Delaware Speedway contenders, Jason Lovie proved his strength behind the wheel with three trips to victory lane over the course of 2021.

The list continues to showcase drivers from across the province, as Teegan Ellis proved to be fast at Full Throttle Motor Speedway in 2021 with a sixth-place finish in the final standings.

2022 Plans: To get out there, have fun and build my experience on the track and grow as a driver.
2022 Goals: I’ve been thinking of a goal for this season, and the goal of mine is to win a heat race and I am going to push myself to obtain this goal.
Drivers to Watch: There are a lot of good drivers out there in bone stocks so this is a tricky one. Someone to definitely keep an eye on is Megan Mitchell; not only has she overcome so much, but she won a feature race her rookie year. Teegan Stanley is another one; out of us rookies last year, he definitely exceeded all expectations as well as earning Rookie of the Year. His growth was exponential. Brad Lavalle has tons of experience on the track and he knows his way around as well. Kyle Johnson is up there on my list too as he was great competition for me, as we both grew our skills. He was almost always right there in front of me or in my rearview mirror. Lastly, Christen Lavalle is a great driver and he has such potential to do even greater this year.
Most Memorable Moment: The B-Main at ACC. Not only did I show myself and my team a huge amount of improvement, I also finished fifth with the track slippery, and ended the night on the scales, which is the first time I qualified high enough to get checked out by the amazing tech crew.

Victoria McLennon showed improvement through the course of the season at Peterborough Speedway, capping off the year with a great Autumn Colours Classic showing. She was also able to show speed in regular points competition, highlighted by a best finish of 10th.

We hope you aren’t driven “batty” waiting for the top-39 drivers to be released.