LONDON, Ontario — Through the highs and lows, Pete Shepherd was able to stick with it all year en route to scoring a third-place finish in the final APC Auto Parts United Late Model Series standings.

“Finishing in the top-three in points for the second year in a row was huge,” he told SHORT TRACK MUSINGS. “I think this was a year that so many drivers could’ve capitalized because there was so many of us that had bad nights, or at least a bad night. We had our faire share as well. Little bit disappointed in the overall performance.

“We weren’t a big threat for the win in a bunch of races. I thought we could’ve been a little bit faster – whether it was just my feedback or something to get the car the way I needed to get it for the guys. But overall, a good reliable fast racecar.”

Through the whole season, Shepherd showed speed throughout the schedule, and was able to score six top-10 finishes, including a runner-up at Flamboro Speedway.

“It was almost like bittersweet to finish second at Flamboro with the adversity we faced,” he reflected. “I wasn’t proud of the race overall. There was a lot of contact. I’d say the first 50, 70 laps, I ran a pretty miserable race compared to the last 25 laps of that race or so. We sorted things out, got a little more patient and got back to a second-place finish with a damaged racecar. 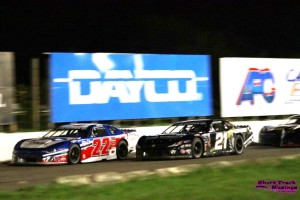 “In fact, it was so damaged it may have affected other races this year. But they got it fixed up and we had some good races – just missing a little bit of speed to get it done.”

While Shepherd has been consistent the past two years, there is one thing missing from the resume other than a championship – a trip to APC Series victory lane. He admitted that was a bigger goal than the title going into this past weekend.

“We’re missing some key ingredients there (and) not getting any younger, so it’ll be tough to do,” he commented. “There’s so many young guys that are coming in that are so talented  every year and coming in very good equipment means it won’t get any easier. We’ll also have to re-access where everything is.”

Shepherd went on to say that he is at the tail of his contract with APC and Canusa as it was a two-year deal.

“They did an awesome job; everything was top notch,” he continued. “We’ll have to see where the programs lies and what shapes up for next year. That’ll be discussions that’ll happen in the winter time so just relax, not think too much about it, and figure it out then.”