Quinton Murdoch Hoping to Turn Season Back Around 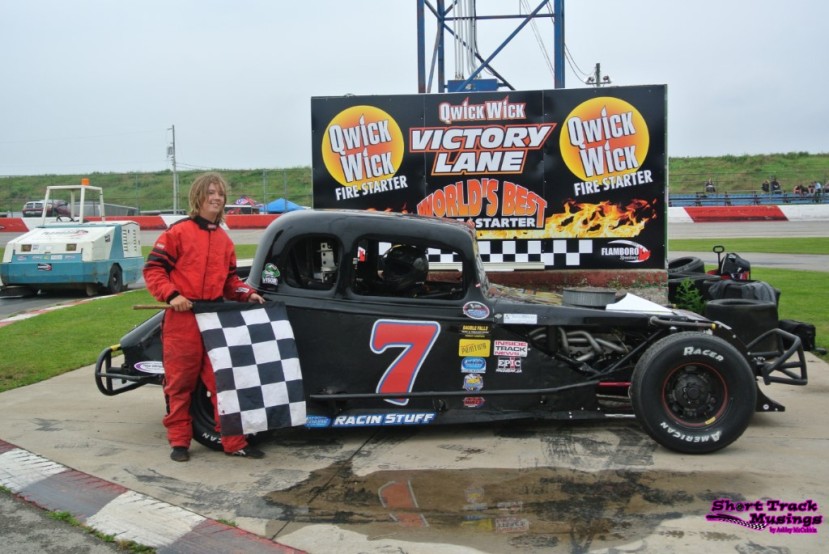 MILLGROVE, Ontario — July 24, 2021 will always be a day that Quinton Murdoch remembers for the rest of his life.  After all, it was the date he reached victory lane behind the wheel of a Canadian Vintage Modified for the first time.

Taking the lead on the seventh lap, he was able to hold off Jerrid Morphy and TJ Marshall to pick up the checkered flag. 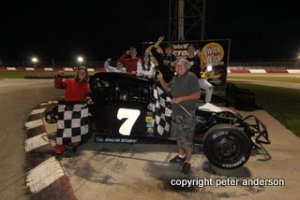 “It definitely wasn’t expected,” he told SHORT TRACK MUSINGS. “I didn’t expect to win a feature for my first couple of years. I was still trying to learn the car and learn the new set-up as this winter, we put coil overs on the car instead of leaf springs. So I was still getting used to the car. But when I got that first feature, it was surprising to me. Everything just lined up and I was able to run away with it.”

Since then, Murdoch was able to reach victory lane once more, though has placed no better than 10th in the four other features.

“At the beginning, it wasn’t terrible; we were getting a couple top-five finishes weekly, got my first few feature wins,” he commented. “The last couple of weeks, I’ve been struggling a bit, but we’re looking to get back into it and really work on the car and see if we can squeeze in a few more features.”

As a driver, Murdoch feels improving his consistency behind the wheel would be huge, as being a top-five contender each week would help him out in the standings. Whether or not he can take that success and turn it into something else, is yet to be determined as well.

“Well, we’ll have to see what happens in the future,” he said. “It depends, maybe we get really quick in the Vintage and maybe we want to move up to Super Stock or a Pro Late. It just depends on sponsorship and finances. We’ll just have to see how things line up and if they work out as we hope they will.”

For Quinton, motorsports has been part of his entire life, as he is a third-generation racer. His grandpa took part in WKRC go-karting league years back, which led to Murdoch getting his start at the age of five. Admittedly, his first win is his most memorable moment when he looks back.

“Probably my first win, because the first couple years at Flamboro, I couldn’t get it done,” he recalled. “I was maybe finishing fourth or fifth on the podium. But I think three or four years in, I went to Innisfil and got my first win there in go-karts.”

The family influence runs deep, as Murdoch called both his grandfather and dad his racing heroes, and has been embracing the unique opportunity to race with his father Steve Murdoch this season.

“So years ago, we originally wanted to build a mini stock and my dad was building one for Ohsweken. We were going to go race dirt but the car didn’t end up getting built in time so we just scrapped the whole idea,” he shared. “Then a couple years ago, the opportunity rose to get a CVM car, which was the Phil Shaw car, which is now my dad’s (No. 42) car. Me and him were going to go halves on it and for years, he wanted to drive to these cars. So when the opportunity came about, we took it and bought that car, and eventually halfway through the 2020 season, we were able to get the 7 car. We were both able to have cars and make it work.”

Looking over the moments, he says it has been fun the couple of times they have been able to run side-by-side.

“Racing against him in hobby cars has definitely been interesting – he always wants to beat me, and I always want to beat him so it keeps it competitive,” he added.