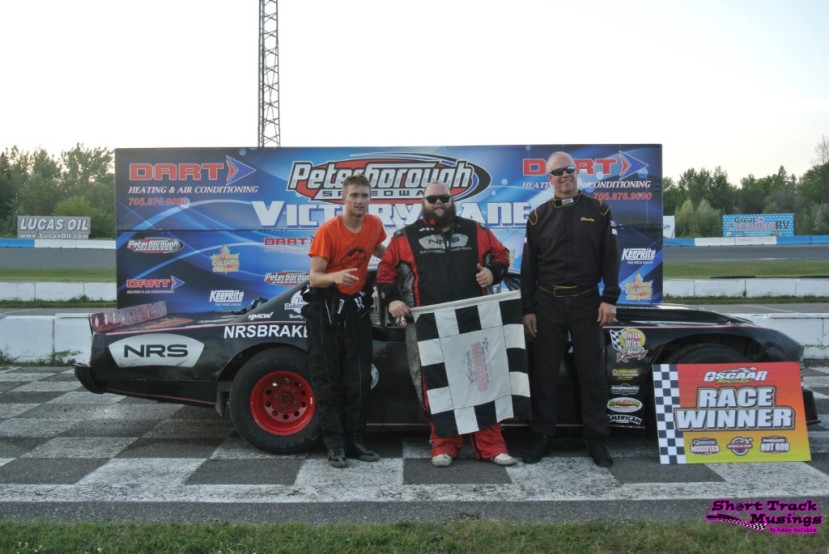 The first heat of the afternoon did not go as planned, with an incident involving Amanda Balson, Adrian Foster, Jim Blackwell, and Sean Walker. Notably, Balson and Blackwell would be done for the afternoon. Dave Waite picked up the checkered flag ahead of Sean Walker, Steve Mayhew, and Ryan Cowan.

The second heat featured an incident, with contact between McMaster and McLean resulting in McLean making contact with the outside turn three and four wall with the passenger side, with the driver’s side door ripped off. McMaster picked up the checkered flag ahead of Waite, Walker, Hannah, and Lavalle.

Gary Hannah grabbed the lead off the drop of the green flag ahead of Book and Waite, with Book challenging Hannah for the top spot on Lap 2, as Hawn got alongside Waite for third ahead of McMaster. Tyo ran sixth in front of Walker, with Lavalle and Cowan side-by-isde for eighth.

Tyler Hawn would move into the top spot on Lap 5 ahead of Book, as Waite ran third ahead of McMaster, Hannah and Tyo, with Walker and Lavalle side-by-side for seventh ahead of McLean. McMaster would then challenge Waite for third on Lap 8, completing the pass a lap later, as Foster got alongside McLean for eighth.

With 12 laps on the board, Hawn continued to lead ahead of Book and McMaster, with McMaster taking over the runner-up spot a lap later. Waite ran fourth ahead of Walker, Tyo, Lavalle, McLean, Walker, and Foster. The caution then came out on Lap 17 for Tyo going around on the backstretch.

Hawn got a good restart ahead of McMaster, Book, Walker, McLean, Foster, Lavalle, Tyo, Walker, Cowan, and Mayhew. Foster continued to move forward, passing McLean for fifth on Lap 21, with Walker and Cowan both getting by Tyo a lap later. The shuffling continued, with Lavalle getting by McLean with a couple laps to go.

With the victory, Tyler Hawn extends his points lead to nine markers ahead of Steve Book.

The next event for the Knightworks Design OSCAAR Hot Rods is the Fall Velocity at Sunset Speedway on Saturday, September 18 and Sunday, September 19.