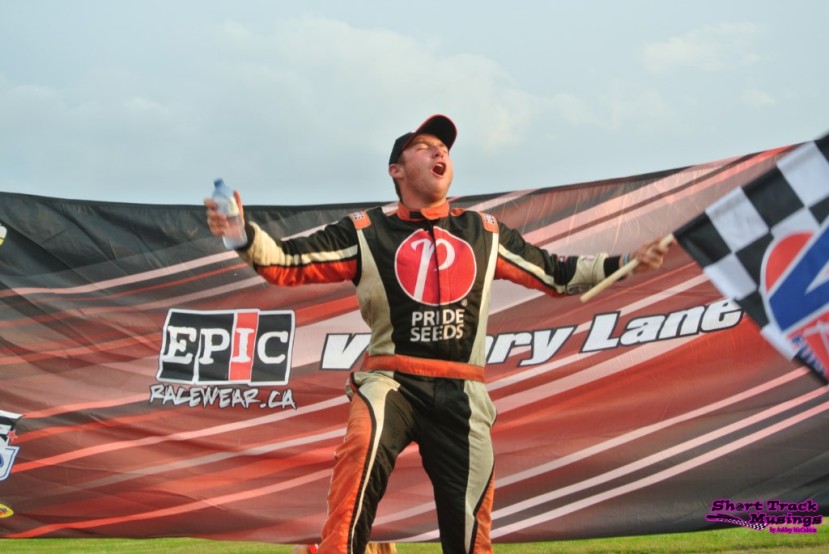 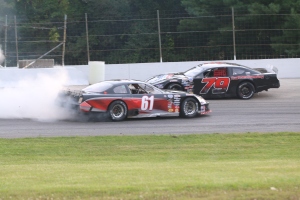 The drop of the green flag saw a side-by-side battle for the lead between Box and Sims, but it did not last long. Instead, Sheridan would work his way by both of them to take the lead on Lap 4 ahead of Gresel, as Sims and Box battled for third.

Shaw would get alongside Box for fourth on Lap 10, with Lapcevich in sixth as Lawrence and Shepherd battled for seventh. Lawrence took the spot on Lap 12, with Shaw moving into fourth a lap later, bringing Lapcevich through with him. 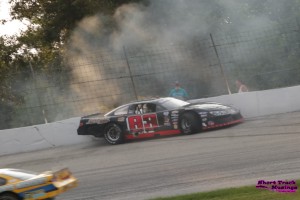 Sheridan would get a good restart, but the yellow flag immediately came back out for Sprung going around in turn two. Sheridan got a good restart once again ahead of Gresel, Sims, Shaw, and Lapcevich, with Lawrence and Box side-by-side for sixth, as Fitzpatrick battled Shepherd for seventh. Lawrence would get the spot on Lap 22, with Fitzpatrick looking to follow him through.

With 23 laps on the board, Sheridan led Gresel, Sims, Shaw, Lapcevich, Lawrence, Fitzpatrick, Watson, and Stade, as Kimball and Box battled for 10th. Kimball got the spot on Lap 26, bringing Shepherd, Gemmell, Benedict, and Farrelly through with him. The fourth caution came out, though, at the same time for Goetz spinning around in turn one.

Sheridan got a good restart ahead of Shaw, Sims, Lapcevich, Shaw, and Fitzpatrick, as Stade and Lawrence ran side-by-side for seventh, as Shepherd and Fitzpatrick battled for ninth. Stade would get the spot on Lap 30, bringing Lawrence through with him as Shepherd and Watson battled for ninth. Shepherd got the spot, bringing Kimball through with him. Kimball initially took ninth on Lap 33, with Shepherd pulling the crossover to try and take it back.

Shaw would move into fourth on Lap 34 ahead of Lapcevich, as Stade continued to run sixth ahead of Fitzpatrick, Lawrence, Kimball, Shepherd, and Benedict, with Watson and Farrelly side-by-side for 12th. Behind them, Pritiko ran 14th ahead of Gemmell, Sprung, Gibbons, Box, and Jackson. 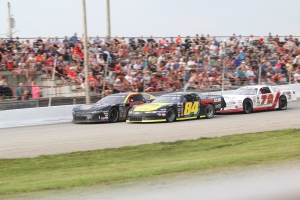 Watson would move into 12th on Lap 42 ahead of Farrelly, with Kimball getting alongside Lawrence for eighth a couple laps later. Kimball would take over the spot a lap later, followed by a pass on Fitzpatrick for seventh on Lap 49.

With 50 laps on the board, Sheridan led Gresel, Sims, Shaw, Lapcevich, Stade, Kimball, Fitzpatrick, Lawrence, Shepherd, Benedict, and Farrelly. Farrelly would get alongside Benedict for 11th on Lap 54, taking over the spot two laps later. Pritiko then moved into 12th, bringing Watson through with him as Benedict now ran 14th ahead of Farrelly, Gemmell, and Gibbons.

Lapcevich would then challenge Shaw for fourth on Lap 60, with Shaw going around a lap later with a spin in turn one.

Sheridan got another good restart ahead of Gresel, with Sims and Lapcevich side-by-side for third. There would be contact, resulting in Lapcevich getting a piece of the outside wall, allowing Sims to take over the spot.

Kimball ran fifth ahead of Stade, as Fitzpatrick and Lawrence battled for seventh in front of Farrelly. Fitzpatrick would take over the spot with six laps to go, with Lawrence looking to follow him through. 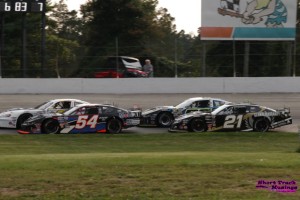 Lapcevich would then get back alongside Sims for third with four laps to go, though was unable to complete the pass. Instead, Kimball was able to get alongside Lapcevich for fourth as the laps counted down.