INNISFIL, Ontario — Making his second start of the 2021 campaign, Doug Butler had the same success as the first appearance, parking the No. 10 Nissan in victory lane at Sunset Speedway. 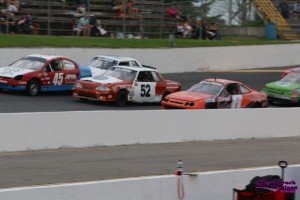 Bullen went for the daily double ahead of Stewart, Josh Inglis, D’Antimo, Tienkamp, and Kris Inglis.

The feature started off with a quick caution right at the start, with Josh Inglis getting spun by Paul Bogesnberger Jr. down the frontstretch as they all got tied together close with Penny.

Josh Bullen broke out to the early lead on the restart ahead of Doug Butler, Charlie Smith, Curtis Stewart, Bryan Penny, and Paul Maltese. Butler wasted no time getting to the front, taking over the top spot on Lap 4 ahead of Bullen, with Penny getting alongside Stewart for fourth a lap later. Penny moved into fourth on Lap 6 ahead of Stewart, Maltese, Bowman, Seguin, and Bogensberger Jr.

Bogensberger Jr. continued moving back through the field, passing Seguin for eighth on Lap 8, with Ken Townsend heading into the pits three laps later with a mechanical issue. Maltese would get by Stewart for fifth on Lap 12, with Bogensberger Jr. getting by Bowman for seventh a lap later. Kris Inglis would also head into the pits on Lap 13 with issues.