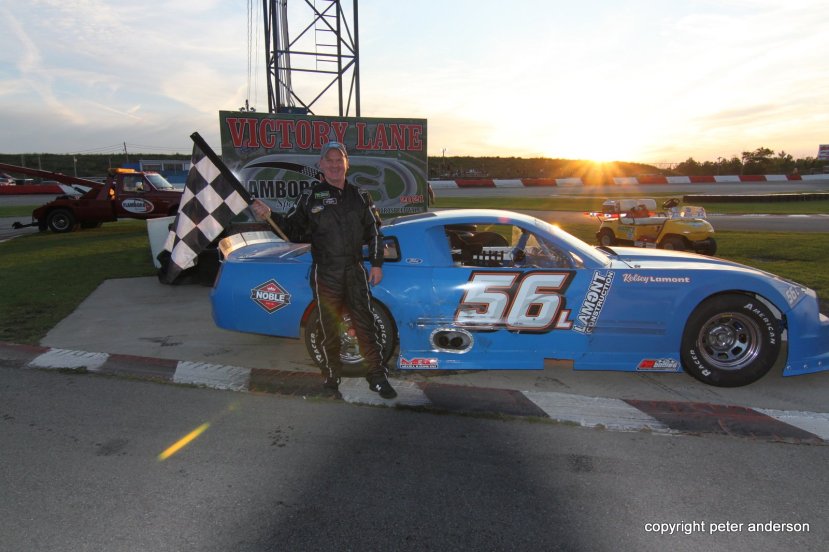 MILLGROVE, Ontario — When the dust settled on Saturday night, it was a couple familiar faces, and a couple first-time feature winners gracing victory lane at Flamboro Speedway.

Starting up front, Shawn Chenoweth took advantage of the track position to score his first feature victory of the season ahead of Mat Box. Kyle Steckly rebounded from a mid-race spin for a third-place finish ahead of Rick Burbridge and Jake Gilbert.

The inverted starting grid for the second feature played into DJ Kennington’s hands perfectly, as mid-race bad luck the first one allowed him to start up front for the second. He took advantage, scoring the victory ahead of Kyle Steckly and Rick Burbridge. Kevin Albers and Shawn Chenoweth rounded out the top-five ahead of Jake Gilbert, Mat Box, Chris Howse, and Shawn McGlynn. Unfortunately, James Horner, David Gallinger, and Brett Rodwell failed to finish.

Carson Nagy was able to somehow carve his way through the chaos with a couple laps to go, coming out with the lead and scoring the victory in the first feature ahead of Nick Troback, Dennis Cybalski, Kelsey Lamont, and Austin Penney.

Kevin Gallant over half of the feature, but contact from Cybalski, followed by Ryden Lapcevich getting a little air off the right front ended the feature early for both Gallant and Lapcevich. Justin Collison and Steve Cashmore both failed to start with mechanical issues.

Kelsey Lamont found his way to the front in the second feature, and scored his very long awaited first career feature victory. Justin Collison rebounded for a second, followed by Nick Troback, Dennis Cybalski, Carson Nagy and Steve Cashmore. Austin Penney failed to finish, while Kevin Gallant and Ryden Lapcevich did not take the green flag.

Since its debut, the station wagon has been a hit with fans in the uniqueness. Gillian Hils proved it also has speed, winning the first feature ahead of Shawn Taylor, Dylan Sharpe, John Istead, and Dale Millard. Mike Hooper finished sixth, followed by Mark Thorne, Dave Goodacre, and Rick Robinson. Unfortunately, Cole Quinton failed to finish.

Shawn Taylor has been racing at Flamboro for a long time, but suffered a hard crash a couple years ago, resulting in having to rebuild his car completely. His hard work paid off, though, as he was able to return to victory lane on Saturday. Dylan Sharpe placed second, followed by Dale Millard, Gillian Hils, and Cole Quinton. John Istead finished sixth, followed by Mark Thorne, Mike Hooper, and Dave Goodacre. Rick Robinson failed to finish. 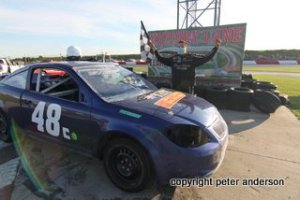 When it came time for the second feature, David Rockwood made his way through the field to make his return to victory lane ahead of Gary Slama, Kyle Lucas, Wayde Thorne, and Megan Mitchell. Roland Goodfellow finished sixth, followed by Bobby Mercer, Scott Tonelli, Spencer Riddell, and Eric Stewart.

Jerrid Morphy would find the lead in the second feature, and was set on cruise control, driving away from the field to score the victory. TJ Marshall found his way to the runner-up spot midway through, followed by Mike Podd, Rodney Rutherford, and Rick Willigar. Doug Hood placed sixth, followed by Dave Lacey, with John Karley finishing eighth following a mid-race slide through the grass.

Unfortunately, Quinton Murdoch, Connor Ross, Mike Westwood, and Steve Murdock failed to finish. Following his issues in the first feature, Dale Lucas did not take the green for the second.

Thanks to Ingrid Hartman for filming each of the features. Be sure to check out her videos at https://www.youtube.com/user/petalpower51/videos.

The next event at Flamboro Speedway is scheduled for July 17, featuring the APC United Late Model Series for a 100-lap main event. Brandon Watson started off the season in victory lane at Delaware Speedway, and will try to go back-to-back this weekend. Also on hand will be the Qwick Wick Fire Starter Can-Am Midget Series and Mini Stocks.

With the province moving into stage three of the COVID re-opening government plan, Flamboro Speedway is allowed to host 75% capacity in the grandstands. No tickets will be sold online, but rather available at the gate on a first come, first serve basis. The spectator gates will open at 5 pm with racing kicking off at 6 pm sharp.