INNISFIL, Ontario — With a couple big passes in the final five laps, Laila Walser was able to work herself to the lead, and take the checkered flag for the first time in her Jr. Late Model career at Sunset Speedway.

Cole Burrows won the first heat ahead of Oliver Ferguson, Kyle Parker, Ryder White, Laila Walser, Brandan Magee, Keegan Moat, and Jake Spencer-Walt. It is worth noting that Spencer-Walt went around on the last lap with a solo spin in turn four. 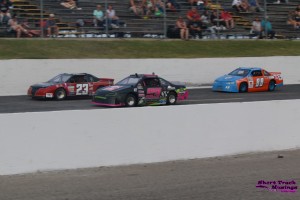 Unfortunately, the second heat would be called short as a result of a mid-race incident. Spencer-Walt would get loose in turn four, getting into Magee, resulting in both drivers making significant contact with the outside wall. Thankfully, both drivers are a little sore, but okay from the incident.

Burrows grabbed the early advantage as the field strung out, until the first yellow flag on Lap 3 for Ferguson going around. Burrows got a good restart ahead of Parker, with White up to third ahead of Walser, Moat, and Ferguson.

The field remained that way until the halfway mark, when the action began to heat up. As Ferguson unfortunately hit pit road with issues at the halfway mark, it’d be Burrows and Parker trading the top spot four times, as they switched lines back and forth to get runs on each other.

Behind them, though, Walser began to mount her charge as she got by White for third. She then caught up to Burrows, getting by him with about three laps to go. She was not done, tracking down Parker for the top spot. She would make her move on the last lap, getting alongside followed by going by to come back around first for her first career victory.