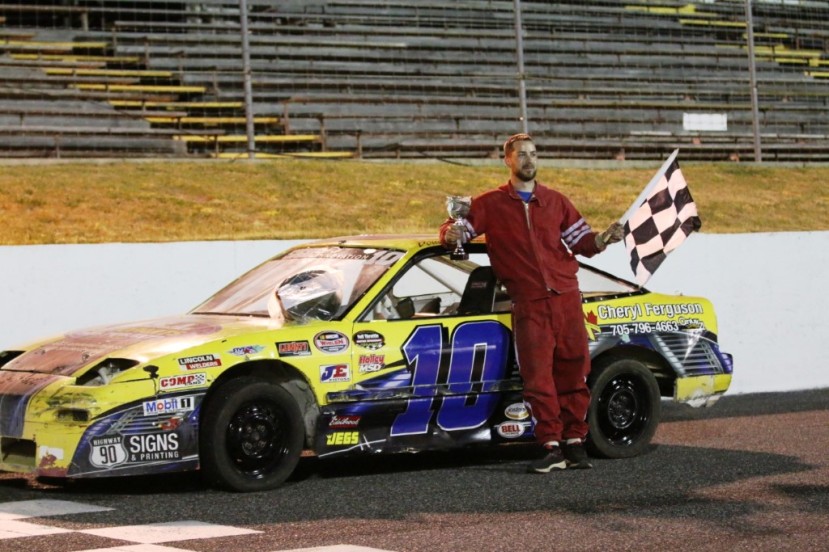 INNISFIL, Ontario — From the drop of the green flag, everybody wanted to come out on top in the race honoring their fellow competitor. But ultimately, the honor went to Doug Butler. 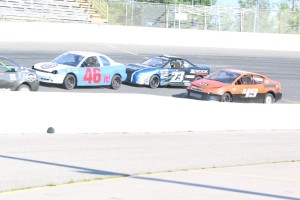 The final heat had a quick caution, with Kris Inglis going for a spin. Matt Boyes picked up the checkered flag ahead of Butler, Bos, Lavalle, Bogie, Kris Inglis, and Laflamme.

Doug Butler jumped out to the early advantage over Seaboyer, Stewart, and Smith, but the caution came out on the opening lap for Toon stalling down the backstretch.

Butler would get a good restart, with Seaboyer and Stewart side-by-side for second. Seaboyer got the spot, bringing Smith, Boyes and Bullen through with him over the next three laps. Stewart now ran sixth ahead of McGlashan, Laflamme, Maltese, and Lavalle, as Burnett headed pit side. Unfortunately, McGlashan’s strong run ended a couple laps later as he headed pit side on Lap 6.

The mechanical gremlins continued for drivers, with Welles and Laflamme following suit over the next couple of laps. This would allow Maltese to move up to seventh ahead of Ryan D’Antimo and Lavalle, with Bowman and Bos side-by-side for 10th.

At the front of the field, Butler continued to lead ahead of Seaboyer, with Boyes moving into third on Lap 10 ahead of Bullen, Smith, Stewart, Maltese, D’Antimo, Lavalle, Bos, Bowman, Everingham, and Wakeling. Unfortunately, Everingham would be forced to head pit side with issues on Lap 11, with the caution flying two laps later for Kris Inglis getting into the inside frontstretch wall.

Butler got a good restart, with Boyes and Bullen taking Seaboyer three-wide for second. Boyes came out on top ahead of Bullen, with Smith getting by Seaboyer in the process. Maltese would move up to sixth ahead of Stewart, D’Antimo, Lavalle, and Bos, before Inglis brought out another yellow flag, this time for contact with the turn two inside wall.

The restart would see Bullen give Butler a shove, allowing Butler to once again get out front. Boyes was still able to make it work, though, moving into second ahead of Bullen, as Seaboyer and Smith battled for fourth. Boyes would then get alongside Butler for the top spot on Lap 15, with Smith alongside Bullen for third as Laflamme headed down pit road once again with more mechanical issues.

Boyes’ move for the lead paid off, as he took over the top spot on Lap 17 ahead of Butler, with the battle for third continuing ahead of Seaboyer. Maltese ran sixth ahead of Stewart, Bos, D’Antimo, and Lavalle. Wakeling had worked his way up to 11th ahead of Bowman, Bogie, and Kyle D’Antimo. Kyle D’Antimo’s run, though, hit a snag as he went for a spin on Lap 19. 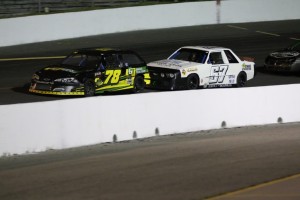 Boyes and Butler would battle for the lead on the restart, as Smith and Bullen ran side-by-side behind them. Boyes would take over the top spot on Lap 20 ahead of Butler, with Bullen moving into third as Smith challenged Seaboyer for fourth. Behind them, Maltese continued to run sixth ahead of Stewart, Ryan D’Antimo and Bos with Lavalle and Bogie side-by-side for 10th. Lavalle got the spot, challenging Bos for ninth a lap later.

At the front of the field, Seaboyer was able to secure fourth, getting alongside Bullen for third on Lap 22. His move paid off, as he was able to get by a lap later. However, it would not be the last pass made on the night, with the caution flying on Lap 26 for Bowman and Wakeling getting together.

Butler would get a good restart to grab the lead, as a three-wide battle broke out for second between Bullen, Boyes, and Seaboyer. It would not last, though, as the yellow flag waved again on Lap 27 for Bowman getting together with Bogie this time. Under caution, Boyes’ car would die on the frontstretch, as a result of a battery issue.

The restart would see Butler and Bullen side-by-side for the lead, with Seaboyer looking for a way to make it three-wide. Butler would ultimately come out on top, taking over the top spot ahead of Bullen, Seaboyer and D’Antimo, as Smith battled three-wide with Stewart and Maltese for fifth.

Bullen wasn’t ready to go down without a fight, driving it as hard as he could through turns three and four on the last lap. The move would get him close to Butler, before the No. 67 Mustang broke sideways loose, doing a 180 on the frontstretch as Bullen came across the start-finish line sideways. He managed to keep it off both the outside and inside walls, before spinning into turn one to complete the event.