While many drivers across the province of Ontario were unable to get in a lot of racing this season, Matt Haufe ensured that would not the case for himself, beginning his race season in January to help his chances in qualifying for the INEX Legends World Finals in the Fall at Charlotte Motor Speedway.

Although known for one of strongest oval track competitors, he has proven himself worthy of the road courses in Legend competition, as evident by finishing third in he World Championship and winning rookie of the year at New Hampshire Motor Speedway road racing in 2019. 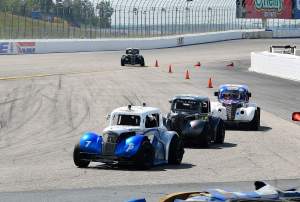 “We headed South to Charlotte Motor Speedway the last weekend of January and first weekend of February for the two double header winter heat road course races on the long track configuration which comprises the majority of the NASCAR Roval,” he explained. “In order to qualify for the road course world final and the world points championship, you must collect points in 10 INEX sanctioned road course events and one National qualifier event. This gave us four of the 10 required races, giving us the freedom to run more oval events in the summer.”

The experience for Haufe is something he reflected as being one of the most memorable for 2020.

“After traveling to the track and US Legend Cars International for the past 10 years, it was a real treat to add the track to the list,” he commented.

He also tackled the oval side, beginning with testing at Peterborough Speedway throughout the summer with as part of Canadian Legends Cars tire testing program following the release of a new Hoosier tire for the series. The experience paid off, as evident by winning the first event, and a third in the second race. The victory meant a lot as it marked his second in Kevin Foisy’s personal car, whom has been “a long time mentor in my Legends racing career.”

He wasn’t done there, though, using the time off the track to work as a instructor and help others. 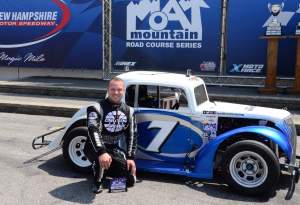 “The Matt Haufe Racing Driver Development program took shape this year and I had the pleasure of working with new drivers and veterans returning to the sport,” he commented. “Overall it was a very successful year in an unexpected way.”

“I am itching to get back to the USA to continue working on our road course program and returning to Evans Mills Raceway Park, NY after watching them take advantage of 2020 to make countless improvements,” he commented. “Whether or not we get back to racing in Canada or the USA, I am looking forward to having the opportunity to work with new and returning drivers to the MHR Driver Development program. Last year was a real pleasure helping drivers reach their goals.”

Being able to race across North America the past couple seasons certainly has seen the No. 7 race at 20 different venues, though his favourite oval is the one that is close to home.

“My favorite Oval course is Kawartha Speedway,” he shared. “I particularly love the speed and incredible transition from the high bank to the flat center of the corner and back up the bank on to the next straight away.

“My favorite oval track with the total experience has to be the Bullring at the Las Vegas Motor Speedway. Located across from Nellis US Air Force Base, the fighter jets doing drills all day never gets old. The Bullring itself is part of the NASCAR facility and has a lot of similarities to Kawartha Speedway, however it is more D shaped. Oh, and did I mention it’s in Las Vegas and a short drive from the strip. It is the ultimate vacation race track. 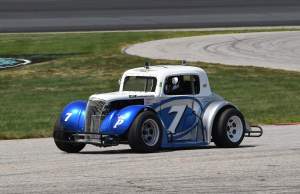 “I also don’t think it’s fair to compare oval to road course as they are amazing for very different reasons. My favorite road Course has to be Atlanta MotorSports Park. AMP has a lot of technical corners, heavy braking zones, elevation changes, blind off camber corners, and the ability to reach speeds up to 120 mph or 193 kph. AMP is a private world class facility similar to a private Country club but for race cars.”

While he’s been involved in Legends for awhile, it originally was the perfect progression for him in moving through the racing ladder after beginning in karts. In looking for something racing, he notes they are affordable, lots of availability in places to compete, spec chassis, have a large governing body, and rule package.

“Legend Cars tick all the boxes – small cars, short wheel base, hard but incredibly fun to drive,” he commented. “The major success of the class is the standardization and regulation of car parts and major rule package. This being said I can take my car and race it at any track in the world that hosts INEX sanctioned legend car events. US Legend Cars International is the largest race car manufacturer in the world having legend cars in over 29 countries across the world. This allows drivers to compete for world titles in a world points championship system.”

The combination of equal equipment, short wheelbase, relatively hard tires, and a good power to weight ratio making them some of the most fun cars to drive, and even watch for fans.

“Having a good rule package and a major sanctioning body goes a long way as well to making these cars fun,” he added. “The Legends class lets you compete all over the world on asphalt ovals, dirt ovals, and road courses. Legends have a subclass for everyone. Young lions 12- 15 years old , semi pro 16- 39 years old, Masters 40- 59 years old, Golden Masters 60 + years old and the pro devotion 16+ years old. To be in the Pro division, you must graduate from the semi-pro class as this is the premier level for Legends racing. This allows you to run for local points at your tack as well as state, regional, and world points in your respective division. This adds a fun factor to drivers that want to compete at different levels.”