SAUBLE BEACH, Ontario — In a battle that was wagged through the final series of 30 laps, Brandon Watson held on en route to winning the Stewart’s 100 presented by Quaker State at Sauble Speedway.

Shae Gemmell was the top qualifier with a lap of 14.249 seconds ahead of Jake Sheridan (14.274), Pete Shepherd (14.361), Jo Lawrence (14.364) and J.R. Fitzpatrick (14.377). Though with the re-draw for the line-up, it’d be Sheridan leading the field to green ahead of Andrew Gresel, Josh Stade, Fitzpatrick, and Ryan Kimball. Treyten Lapcevich started sixth, followed by Gemmell, Shepherd, Brandon Watson, and Lawrence.

The race would get off to a rough start, with a caution on the opening lap for Gemmell spinning Lawrence off of turn two.

The second attempt was cleaner with Andrew Gresel taking the top spot ahead of Sheridan, Fitzpatrick, Lapcevich, Stade, Kimball, Gemmell, and Watson, with Pritiko and Shepherd side-by-side for ninth. Pritiko would get the spot on Lap 7, bringing Chenoweth through with him to bump Shepherd back to 11th. Gibbons ran 12th, followed by Wickett, Adrianson, Box, McGlynn, Ellis, and Lawrence. 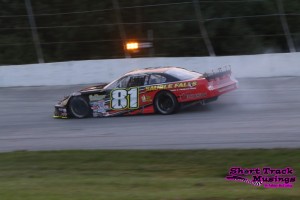 Gresel seemed to have the race in his hands, holding the healthy advantage over the field. However, everything went up in smoke – literally – as the white haze began to escape from the back of the No. 81 Late Model. It thickened, fluid leaking out, ultimately bringing out the caution at Lap 12 with Gresel heading pit side, done for the event.

Sheridan and Fitzpatrick restarted as the front row, with Sheridan taking the top spot on Lap 13 ahead Fitzpatrick, Stade, Lapcevich, Gemmell, Kimball, Watson, Pritiko, and Shepherd, with Adrianson and Gibbons side-by-side for 10th. Adrianson got the spot on Lap 16, bringing Wickett, Box, and Lawrence through with him.

Closer to the front, Watson began to play peek-a-boo with Kimball for sixth on Lap 19, while Adrianson looked underneath Pritiko for eighth. Adrianson got the spot three laps later, bringing Wickett through with him as they went around the lapped car of Wilson. Lawrence would then get by Pritiko to continue his charge forward on Lap 26.

The race seemed to have a natural flow to it, but that wouldn’t remain as Box began to slow with a problem on Lap 30, drawing the caution once he stopped in turn two. With 70 laps to go, Sheridan led Fitzpatrick, Stade, Lapcevich, Gemmell, Kimball, Watson, Adrianson, Wickett, Lawrence, Pritko, and Shepherd.

Sheridan got another good restart, with Stade looking underneath Fitzpatrick for second, as Lapcevich ran fourth with Gemmell and Kimball side-by-side. Gemmell got the spot on Lap 33, allowing Watson to get underneath Kimball and look to follow him through. Fitzpatrick would clear Stade on Lap 35, securing the second spot as Stade now ran third ahead of Lapcevich and Gemmell. 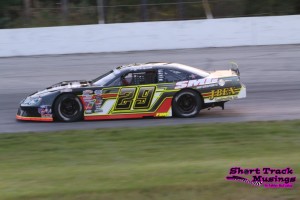 The battle continued for sixth, with Watson getting by Kimball on Lap 36, as Shepherd and Adrianson, Lawrence, and Wickett rounded out the top 11. Watson continued his climb forward, passing Gemmell for fifth on Lap 39. The caution then came out four laps later for Ellis going around in turn two.

Under the caution, there’d be contact made between Sheridan and Fitzpatrick down the backstretch. This would not turn out well, with Sheridan suffering a flat tire as visible as the field came back to green. The No. 52 would not get going, with the field somehow splitting him without further contact as the yellow flag came back out.

The second attempt would see Fitzpatrick and Stade side-by-side for the lead, with Lapcevich and Watson battling right behind them. Fitzpatrick would take over the top spot on Lap 44, but unable to get away as Stade played tag. At the same time, Watson would look to the outside of Stade, ultimately falling back as Stade secured second ahead of Watson and Lapcevich.

Gemmell would make his way forward, though, getting by Lapcevich for fourth on Lap 47. Behind them, Adrianson and Kimball ran side-by-side for sixth ahead of Shepherd, with Adrianson securing the spot on Lap 46. Shepherd ran eighth ahead of Lawrence, Wickett, and Chenoweth. Shepherd would get underneath Kimball for seventh at Lpa 58, completing the pass and bringing Lawrence through with him.

Things would get messy shortly thereafter as Shepherd lost power off of turn four on Lap 63, causing a stack up behind him. The result would be Chenoweth suffering heavy right side damage, ending his feature, with Kimball, Wickett, and Wilson getting a piece of the action. 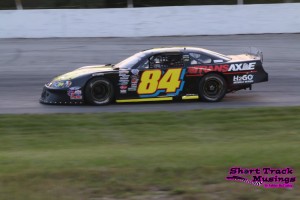 The restart would see Fitzpatrick and Stade once again side-by-side, with Fitzpatrick taking over the top spot. Watson would poke his nose underneath Stade on Lap 65, clearing to take over the runner-up spot. Lapcevich would move into third, leaving Lawrence side-by-side with Stade for fifth.

The race would head back under the yellow flag, though, this time for Adrianson getting sideways through turns one and two, followed by a spin in the grass off the corner. As the field checked up, contact was made, resulting in McGlynn making significant contact with the turn one wall.

The restart saw a battle for the lead between Fitzpatrick and Watson, with Watson taking over the advantage on Lap 67 ahead of Fitzpatrick, Gemmell, Stade, Lapcevich, Lawrence, Freel, Sheridan, Kimball, Shepherd, Ellis, Priitko, Gibbons and Di Venanzo.

Sheridan would continue his climb back forward, getting alongside Freel for seventh on Lap 70. He completed the pass a lap later, bringing Kimball, Shepherd,  Ellis, and Pritiko through with him. Freel now ran 12th ahead of Adrianson, Gibbons, Di Venanzo, Morneau, and Chapman.

At the front, Watson was unable to get far away from Fitzpatrick despite being the leader, with Fitzpatrick keeping the No. 9 in his sights. He was able to get back underneath him for the lead with 21 laps to go, taking the spot a lap later. Watson wasn’t ready to be defeated, though, returning the favor immediately as the pair ran side-by-side for a couple laps.

It appeared as though Watson was ready to hold serve with 15 laps left as he finally cleared the No. 84 for the top spot, however the battle wasn’t done yet. Fitzpatrick tagged the back of the No. 9, sending Watson sliding sideways off of turn two. Watson would hold onto the car, and the top spot, getting the advantage off the corner and putting some distance between them.

Gemmell saw the door of opportunity open up, taking advantage immediately as he took over the runner-up spot, with Lawrence following suit a couple laps later. Lawrence did not settle there, though, catching Gemmell and passing him for the runner-up spot with three laps to go.