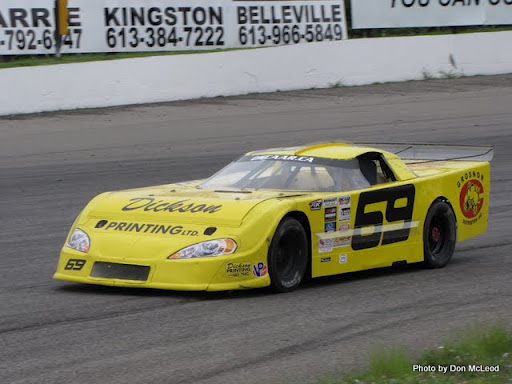 Over the past 30 years, OSCAAR has thrilled fans across the province of Ontario with side-by-side thrilling battles right down to the checkered flag.

Although we’re currently staying at home to stay safe, the anniversary is special to everybody involved in the series, past and present, from originators and the officials, to the drivers and fans.

OSCAAR felt it was the perfect time to pay homage to our beginnings, and catch up with past and current faces to get their thoughts on the occasion.

As a child, Mike Bricknell attended several races alongside his father at Pincrest Speedway and the Canadian National Exhbition. These trips to the track left a lasting impact, including a special interaction with one of the competitors.

“Ted Hogan put me in his car at the CNE and drove me around the track when I was a kid,” Mike Bricknell said. “So I think that’s where I got my bite.”

Bricknell would eventually get behind the wheel himself, though also became a very important part of racing history in Ontario as one of the founding members of the Ontario Association of Stock Car Auto Racing, known as OSCAAR.

“Tthere may have been five of us, but four of us stuck with it,” Bricknell recalled. “I think maybe Rudy Oppersma was involved for a bit, but then he went a different direction. But the four of us – Al Thompson, Terry Robichaud, Dave Taylor and I – we basically sat down and were trying to figure out that we’d like to have a traveling series, go from track-to-track than staying at one or two tracks. So that was basically our reason for trying to start this up.”

When the initial pieces were put together, the soul focus was on the super late models in trying to get a tour going for them. For Bricknell, the sheer speed and control you can have over the car are what attracted him to the pavement beasts.

Through the years in racing with the super late models, there were quite a few memorable moments, including a race against one of his good friends Brian Catchcart at Peterborough Speedway.

“Brian was sponsored by Coca-Cola at that time, so I guess he really wanted to win that race for Coca-Cola because Pepsi supplies the product to the track,” he said. “I was very lucky. He was inside pole, I was outside pole, and I got the jump on him and then I won. That was a good one; I really remember that one just because of Brian. Brian and I are good friends – I mean, there’s a lot of racers that I’m good friends with from our time in racing.”

Another fond memory was a Wednesday night special at Peterborough, where he got the upper-hand on one of the most well-known and greatest drivers in the province.

“Junior Hanley was there – and of course, you know what happens when he shows up – everybody is racing for second,” Bricknell shared the story. “I guess I took his fender off and anyhow, I won the race. Apparently, I heard that he was coming up, in second, but there was not enough laps. But when you can compete with guys like Junior Hanley, and all these guys and show well, it’s really good. I know every time people went to the track and Junior showed up, you were racing for second – and Biederman, too.

“I am a real Biederman lover, and those two guys – I was behind them at Flamboro, and you could see one driver look over at the other driver and make a right hand turn on the track. The competition was really good, and then back then, we built our own cars. We never had big guys, and did our own suspension and everything.”

Although the super lates are no longer part of OSCAAR with a focus on the modifieds, Hot Rods, and Pro Sprints, Brickenll says that he has very happy that it has continued to grow as it has.

“When the Ontario Association of Asphalt Stock Car Racers was formed, that was originally one of Terry Robichaud’s thoughts in that we would expand to try to be like a union for all the other classes of racing. That’s what we had inspired to hope to do – that’s why it’s called Association of Stock Car Auto Racing. Although we had a difficult time of getting the super late models up and running – we had another club up and running against us, but we succeeded that way and kept going.”