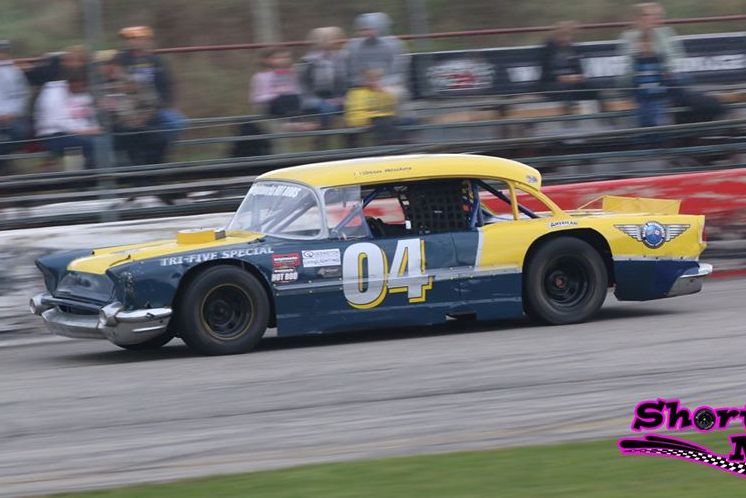 After getting his feet wet last year with the Knightworks Design OSCAAR Hot Rods presented by Sauble Falls Tent and Trailer Park, Sean Walker is ready for this year to begin.

“Basically, I just go out to have some fun,” he commented. “I don’t take it too seriously as far as points, but rather go out for the moment.

“I am looking forward to putting the other car together. The ’55 Chevy is coming back out there, but we’re building a wagon, as well. We got the chassis done, so now we got to mount the body to it. It worked out that Dave (Gainforth) actually found me a body – it wasn’t too far, only an hour and a half away from here so I said great. It’s stuff that’s hard to find around here. “

Although there’s a focus on continuing to run up front, Walker says the main thing is he wants to have fun and enjoy the experience.

“I’ve always tried to run as clean as I can, the best as I can, and have fun,” he said. “If I can’t have fun in it, then there’s no sense in showing up to the race track. You have to enjoy yourself.

“I also always say that racing is a bit of a family. I got the OSCAAR bug there a few times, because all the people, when I have a problem or someone else has a problem, they offer each other stuff – and we get the same thing when we run Peterborough (Speedway) when we run there with the late model, super stock, mini stock, and bone stock. So we have this little family, right?”

Though when it comes down to it, he would love to be able to put his 1955 Chevrolet in victory lane at least once this season.

“We got close to it a few times in regards to finishing pretty good with the first time in that car, so my goal would be to get a checkered flag,” he explained.

With the current schedule slated to have Walker travel across the province, Walker notes that getting to his home track of Peterborough Speedway a couple times is high up on his radar.

“I actually like Sunset (Speedway), too,” he added. “It’s also been a long time since I ran at Jukasa (Motor Speedway); I ran it when it was Cayuga. I kind of looking forward to seeing new tracks that have been repaved, reconfigured since I’ve been there – even Sunset. I mean, I ran these places before when they were little fishbowls. Now they have new pavement, new walls, new signs – it is interesting to go back and say, ‘Hey, this is better than it was before.’”

For Walker, he got interested in stock cars by attending a practice session at Mosport back in 1992. Although he was involved in drag racing at the time, he was just supposed to be there to watch someone. Though when they did not show up, the team owner offered Walker a chance to jump behind the wheel himself for the first time.

“Next thing you know, I went out and turned some lap times and he asked if I wanted to run next Saturday night at Mosport to start the season,” Walker recalled. “He said that I was way better than the guy that he had driving. So I started driving and drove for him for one year at Mosport (Raceway), and then we moved to Peterborough and I ran two years with him there before he got out of racing. I ended up buying the car off of him, and that’s what started the whole ball. I ended up going from just a driver to a owner, bottle washer, cook, you name it.”

Even though he’s had several memorable moments in racing himself, his son’s first trip to victory lane stands out among the rest.

“The first weekend of racing at Peterborough, he had some problems with the car but he was doing pretty good, and he went out and won the b-feature at the end of the night,” Walker recalled. “So he started at the back – which was about 10 or 11 cars – and I kept telling him to take it easy, he’s doing fine, we’ve had some problems but you’re doing pretty good, and just keep it up and finish the race.

“So what does he do? Two laps in, he’s going three-wide on the high-side and next thing you know, halfway through the race, Lap 5 or something like that, he’s running second and he won it. It was nice because we got to go to victory lane – myself, him, and his mom – and it was pretty neat being his first time in the car. It was a pretty special to see my son do that after changing his diapers for so many years and stuff like that. It’s quite the accomplishment to see your own son do that.”

With the experience gained through the years, Walker’s advice to someone else wanting to get involved in racing is to go out and have fun.

“This is supposed to be a fun sport,” he commented. “NASCAR is not out there looking to pick us up next week, so I always say take care of your equipment, do the best that you can, and have some fun. It’s supposed to be a fun sport so I know you want to win, but you have to finish the race to win. I always used to tell guys that as if it’s on the end of a tow truck in the pits, you won’t get anything out of it.”