“Entering this season it’s all about having fun, and with this crew that shouldn’t be a problem.”

For the 2020 season, OSCAAR is introducing a team aspect to the series, which will allow up to three drivers to race a single entry and earn points towards the championship.

McLean Racing has already revealed their plans with the rule in play for the Knightworks Design OSCAAR Hot Rods presented by Sauble Falls Tent and Trailer Park, as they will have Jeremy McLean and Darin Malcolm split the driving duties.

“Jeremy and I have chatted about me getting in the seat here and there over the past couple years,” Malcolm commented. “This year just seemed like the year to commit to a program. Having a young family has taken priority over my summers, but now that they are a bit older, makes it easier to get back in the racing scene again and a chance for them to see and enjoy what I have done over many years.” 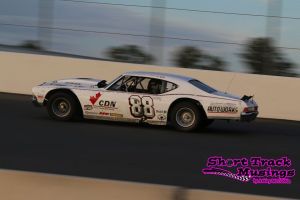 Entering Hot Rod competition for the first time in his career, Malcolm says the goal is to be competitive, and they can score a win, that’d be a bonus.

“I’m looking forward to racing at Sunset Speedway,” he added. “A lot of family members and friends will be attending; that’s what it’s all about – bringing family and friends together just adds up to a great time!”

For Malcolm, he got his start behind the wheel at North Bay Speedway in 1995 as part of the Thunder Car Division, scoring the points championship in both ’95 and ’96.

“In 1997, I took over the seat of my dad’s Late Model at Barrie speedway,” he recalled. “Following in my dad’s footsteps in which he raced for years at Barrie speedway dating back to the early 80’s where he won multiple track championships. In 1988, my dad Brian also owned and operated North Bay Speedway, getting the track back up and running after years of it being shutdown.”

Through his late model career, he was able to have lots of success along the way, with plenty of trips to victory lane.

“My most memorable racing moments would have to be winning the 13th annual Autumn Colours event in 2005 with the Limited Late Model and also winning the 1999 Late Model Alstar race at Sunset Speedway,” he commented. “With numerous late model feature wins over the years, many of those rank up there as well.”

With all of his experience through the years, Malcolm’s advice to someone getting started is “get seat time, take advantage of practice sessions, and to be prepared for race nights.”