After a solid rookie campaign in the APC Auto Parts United Late Models of Ontario Tour, it’s no surprise that Danny Benedict and his team have been putting in the work to be even stronger in 2020.

“Our main focus this off-season has been our APC car,” he told SHORT TRACK MUSINGS. “With the rules changing in the series this year, we made some major changes to our chassis thanks to Dan McHattie Race Cars and GTA Racing Design. I’m very excited to hit the track and see how it all works. 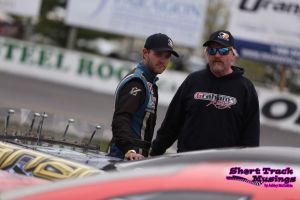 “Although we haven’t forgotten about our LLM program, we’re definitely dialing back a little this year. Last season was tough as a small team to prepare two cars every week, and our performance sometimes suffered because of it. This year our main focus is the APC series, but you’ll still see the (No.) 54 car at Sunset and Peterborough a handful of times.”

Benedict is keeping his goals simple entering the new season, with his sights steady on improving what they were able to accomplish last season.

“Now that we’ve been to every track on the circuit, and have a bit of a notebook, I think the results will continue to improve,” he commented. “Our goal every week is to just learn as much as possible.”

Benedict was able to do a lot of learning last year en route to placing eighth in the standings with a season-best second-place finish at Sauble Speedway. 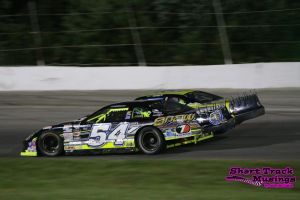 “I think the biggest thing was just padding that notebook,” he commented. “A lot of the times last year, I had never been to the track we were racing at. Going into the race and guessing at the setup with a green driver is far from ideal. Now that we have that notebook, and I’ve turned laps at all the tracks, we’re excited to see what we can do.”

The APC Series will travel the province, running 10 races at five different tracks, with Benedict noting the two events at Jukasa Motor Speedway this season should be fun for his race team.

“We weren’t great there last year, but we managed a top 10 in the second race,” he commented. “When we went there in the fall with the LLM, Dale Shaw and I put our heads together and tried something a little different. The car was really fast right off the trailer, and I’m hoping to apply that to next years APC car. We’re also talking about potentially heading south before the season starts. I can’t confirm a track yet, but we will make an announcement on that soon.

“The second track I can’t wait to get to is Sauble (Speedway). I really feel like I have some unfinished business there. That first win was so close, but regardless of the outcome it gave our team a major boost. We know we’re capable of winning; it’s just a matter of everything working out. They say the first ones the hardest, so we’re going to be pushing every week to get there.”

On top of his success last year behind the wheel, Benedict was able to put his name out there on a North American-scale was one of the seven drivers as part of the Kulwicki Driver Development Program.

“The Kulwicki program was the opportunity of a lifetime,” Benedict reflected. “It was such an honor to represent a legend like Alan. I learned so much from being apart of the program, so it’s hard to pick just one thing. I was so inspired by the other six finalists, and their charity/community work. If there’s one thing I had to take away from the program it would be that. How big of an impact you can have, even with small gestures. I’m really hoping to be apart of the program once more, to really put everything I learned to use and compete for the Kulwicki cup.”

With all the success that he has had from beginning in mini stocks to now a front running Late Model contender, Benedict’s advice to next generation of drivers is making sure to continue building your skills.”

“If I had one piece of advice to offer, it would be something Derek Lynch once told me – don’t stay in one division, at one track for too long,” he commented. “Challenge yourself. Go to new tracks and learn as much as you can. Don’t run from competition, chase it. If you continuously run the same car, against the same drivers, you won’t improve. Also don’t be afraid to ask questions. There’s a lot of people out there that are very smart, and willing to help. Don’t be afraid to approach those people.”