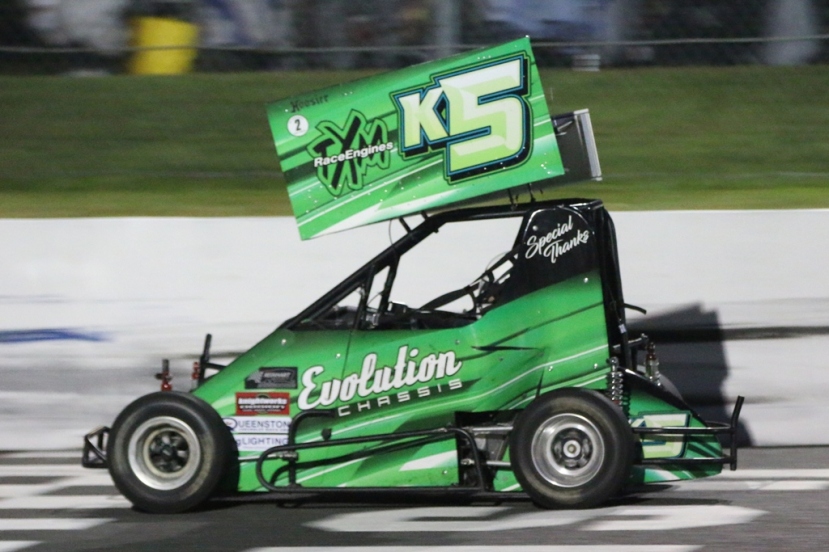 After a solid campaign in the Living Lighting OSCAAR Pro Sprints last year that earned him the Most Improved Driver Award at the banquet, Kevin Taylor is ready to push for more in 2020.

“We’ll be running a full season in 2020,” he commented. “I would have to say that my expectations would be at least one or two top-three feature finishes this season.

“Also, I was extremely happy to come home in fifth place in the points in 2019, but I am fully aware that if some of the part-time drivers had run full schedules, we likely would have ended up seventh or eighth. So I’ll use that as motivation to keep working hard for this season.”

In reflecting back on the 2019 campaign, Taylor says the big focus for him now is to work on being more consistent, and hopes that will come being his second season behind the wheel of this specific chassis.

“I made some driving errors in races that cost me positions on the track,”’ he explained. “So I found myself playing catch up in a few too many races where I could have had better finishes if I had kept the car going in the right direction.

“There is still a ton of speed in this car that we have yet to find through set-up, gearing, clutching, you name it. We just need to keep making adjustments on the car to see what works and what doesn’t work. That’s how we’ll improve.”

Though overall, it was still a solid season looking back as he placed fifth in the year-end standings 12 top-10 finishes, including three top-five’s.

“I was pretty happy with the season we had,” he reflected. “For the most part, we stayed out of trouble and managed some better than expected finishes. I would have liked to been a little more consistent but I think we learned from our mistakes so live and learn.

“From a series standpoint, it was great to see guys like James Stanley, Rob Summers, and Ryan Battilana take their racing programs to the next level. It made for some exciting front of the pack racing.”

Looking back, Taylor says the July 20th event at Sunset Speedway stands out to him.

“We had been pretty quick at Sunset earlier in the season but had some bad luck,” he commented. “We made a few changes to the car and it was fast all night. I believe we led the first five or six laps of the feature and ran in the top-three for the majority of the race, so it was by far our most competitive race of the season.”

Being able to run up front is no easy feat in the Pro Sprints, as the competition seems to just get closer with each passing season.

“It definitely hurts to lose a top quality driver like Daniel Hawn but we have at least three to four other drivers that are ready to be the new guy to beat, so I think the competition will be fierce,” he commented. “When you look back on last season, a car could run fourth one weekend and ninth the next weekend, so there’s a lot of parity in the series mid-pack. We just need a little more of it up front.”

As the series gets ready to grow with a couple more rookies joining the fray, Taylor’s advice is simple to those drivers – have fun.