After taking a step back this season, Cameron McGlashan is ready to throw his hat back in the Mini Stock ring, ready for the full schedule at Sunset Speedway in 2020.

“I think 2020 is gonna be an interesting year with the track switching tires and the possibility of the entire province going to one set of rules,” he commented. “It could really help get this division back to where it was in 2017 with 25-30 cars every week with seven-eight cars having a chance at winning at any time.”

The past track champion is hopeful of getting back to feature victory lane this coming season, just like he was able to do on a pair of occasions en route to his 2017 Sunset Speedway Track Championship. He will also hope to secure his third championship overall at the Innisfil, Ontario facility, as he was also crowned the NASCAR Whelen All-American Series Division IV Mighty Mini champion in 2015.

However, he knows it will be a challenge with a lot of unknowns currently entering the 2020 campaign.

“I’m not sure what to expect with my program this year,” he admitted. “We purchased another mustang and we’re gonna upgrade a few things on it and see how it goes. Being a home owner now, I don’t have the unlimited budget I did before.”

The other factor has been watching the division change while running a partial schedule this past years, as McGlashan added that he feels “the competition really fell off the past two years (as) a lot of guys either moved up or stepped away, so hopefully things pick up this year.”

The current hype around the division is high, though, as a result of the potential rules and spread of invitationals across the province. Depending where he is in the standings, McGlashan says there is potential for him to run the second annual Jukasa Motor Speedway invitational later this summer. 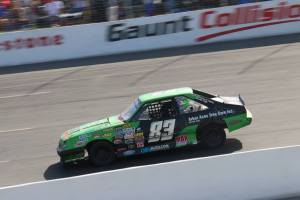 The Mini Stock isn’t the only car he will be driving this year as he also hopes to run the Lusk Motorsports Neon in most of the Bone Stock specials this season.