For the second year in a row, Daniel Hawn put together a dream season en route to being crowned the Living Lighting OSCAAR Pro Sprint Champion.

“I’m extremely honored to be crowned the series championship again,” he told SHORT TRACK MUSINGS. “We knew that we were going to be the car to beat, but with racing you still need some lady luck. We prepared ourselves with all the spares needed if we were to have any issues.

“Points racing for a championship is very different then running part time and going for wins. You need to ensure that you have all you shit together in case of issues.” 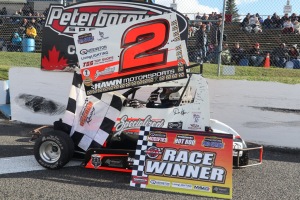 Although everyone will reflect back upon the 11 feature wins and 17 heat victories, Hawn was quick to look back on the race at Sunset Speedway in September. While leading with five laps to go, he blew a motor, crossing the finish line in second.

“We came in and changed engines – a huge shout out to James Stanley and Adam Hagen for tearing it down while I was racing the TQ midget  – to the brand new spare and went out for the second feature and ended up winning the race and the overall night,” he commented.

The dedication shown that night at Sunset Speedway is just a touch of what can be seen throughout the entire Hawn Motorsports team, with Hawn noting that they spend numerous hours every single week in the shop.

“One thing I can tell you is that Saturday night after the races the car is unloaded, put on scales and everything recorded, we upload all our mychron data to a laptop and review it on Sunday,” he said. “I am extremely lucky to have Adam come to my shop 2-5 days a week and help me and my brother (Tyler) on our cars. There are no words that I could say that would make me show my appreciation!

“We also do a lot of testing with my pro. We have chopped it up and changed it at least once or twice through the year (every year since we owned it) to try and further our knowledge.”

For Hawn, it wasn’t just about the victories this season, but also the friendships. It’s why when asked about his favourite moment from the year, he referenced finishing second to James Stanley at Peterborough Speedway in August.

“We have became great friends over the last 3 seasons and to be able to be a part of that win through helping him with set up and working for what seems to be like forever on his “new” car was amazing,” he commented. “It’s not very often you get to be beat by your best friend.

“Another thing that stood out this season to me was all the fun I had with him during the season. From him catching me sleeping on restarts or me jumping them…hahaha,  him monster trucking me while we scuff tires. I honestly can say maybe I had a bit too much fun this year, and for that I will be forever thankful to the pro sprints series but especially James.

“I also can thank Stanley Motorsports and his team enough for making my championship this year something to remember. Last year’s crowning wasn’t something I was from a story, we got handed our trophy in a rain delay. For James and his team to make this year so special was a true class act! I will truly never forget the times I had in this series.”

Stanley was just one of the drivers in which Hawn had to battle hard all year for wins, as it seemed each week there was improvement out of the different talents in the class. If you walk through the pits, one of the things helping that happen is Hawn and his team sharing advice with the other drivers.

“I’m hoping when I’m gone that others who have gained the knowledge over the years will help and continue to help the people that struggle,” he commented. “It is no fun to race by yourself, trust me I know. I’m looking forward to watching the talent and competition increase again next year! I have created a lot of friendships over the last three seasons, a lot of good but also in rare cases some bad.

“The worst part is to be called a cheater or someone complain about my car to be teched; it’s never hard work and the driver that wins races. So it was nice to help out a team and give them all my knowledge and watch them succeed. This proved to the haters that in fact a good set up, a good driver and a good crew chief can win races too.

“So now for James, he is a great person and I am lucky to be able to call him one of my best friends. There’s not much else to say really other then I really and truly wish that my dad was around to get to know him the way I do. He will be a force in 2020, and if there is going to be a team out there to beat him, they better buckle down now!”

For Hawn, his focus is set to shift a little in 2020 as two Can-Am Midgets currently sit in the shop, with that as the focus for the new year in a full campaign. Hawn got his feet wet in the division this past season, scoring a couple top-five’s.

“The Can-Am season didn’t go as planned for us,” he said. “We had some mechanically issues and after we got those sorted we needed to make some upgrades. We made those upgrades but weren’t able to get much testing, and by much I mean none. So after a few races we started to really get the handle on things and started to move up the ladder. We finished third at sunset which was the best to date and also lead a lot of laps at Sauble (Speedway).

“I have said it a few times, I respect anyone who will strap into one of these cars. These things are complete animals and I fell in love from the first time I laid eyes on one. We will be running full time next year hoping to stay in the top-five and try to push for our first win in a series. This isn’t going to be an easy task, but it’s something that maybe later in the year is a possibility.”

Hawn also hinted that the team is trying to debut “something special” this season, as well.

“If we can get all the pieces lined up and some of that lady luck, everyone should be pretty shocked what we have in store,” he commented.