When the 2019 season originally began at Flamboro Speedway, Mark Thorne was supposed to just run a part-time campaign, filling in Phil Givens. Though a couple weeks in, plans would change with him becoming the primary driver.

“I guess it was a success finishing second in points, but I was a little disappointed not finishing stronger the last few weeks,” he said. “I’m also very happy to see Leo (Labarbera) win the championship this year. He’s put a lot of work in and deserves it.”

Through the season, Thorne was able to put together some solid numbers, with 24 top-five’s and 31 top-10’s, including three victories throughout the year. The success allowed him to battle against some of the best in the Pure Stocks, including one of his favourite moments going back and forth with Gillian Hils and Jordan Morris early in the season 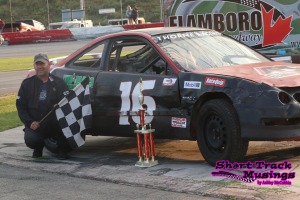 “We battled hard for both features running door to door,” he recalled. “It was good clean racing the way it’s supposed to be”

Those mentions just touch the iceberg in the level of competition currently experienced in the McClurkin Properties Cambridge Pure Stock class, with 12 different drivers scoring feature victories this past season.

“The competition level was very good this year,” Thorne commented. “As we got deeper into the season it got a lot tougher. With the penalty weight added for wins and the rookies getting more experience it was so much harder to make passes.”

Of course, the success didn’t come easy with lots of time spent in the shop, which Thorne admits can be hard to squeeze in due to being on the road with work.

“We have a lot going on running Ohsweken (Speedway) mini stocks and Flamboro mini stocks & pure stocks,” he commented. “We couldn’t do it without all the help Wayde and I get from the Wallace’s and friends. We had to park one of the dirt mini stocks this year, just because we had no time to fix it with everything else going on.

“I also have to thank Eric Stewart for the use of his car for the last two weeks of the season. So basically once the season starts, it’s all racing every weekend and every spare moment.”

Thorne will be back racing next season, planning to have a pair of mini stocks in competition at Ohsweken Speedway, along with running a pure stock at Flamboro on occasion.

“I would love to try out some different tracks next year like Full Throttle, Sunset and Sauble Speedway,” he added. “I would like to have a few off weekends, but that never seems to work out.

“I would also like to thank all of our sponsors this year. APC Simcoe, Ken Wallace Contracting, Buchwald Landscaping, Simingtons Automotive, Brant Tractor and Lisa C. Thorne, Independent Consultant with Thirty-One Gifts, Arbonne and Norwex.”