Nolan Gould may have got the championship at Peterborough Speedway in 2019, but he did not get the Autumn Colours Classic victory. Instead, he would be denied the win by his Farm Bros Racing teammate Ryan Oosterholt.

Jassen Whyte won the fifth heat ahead of Gould, Tolton, Sanders, Nelson, and Thompson. Kenny would fail to take the green flag due to mechanical issues, while Andy Kamrath had a oil line let go causing a fire while leading the field.

Issac Dippel went for the daily double ahead of Feeney, Dunlop, Watchorn, Bos, Phinnemore, and Wakeling.

The drop of the green flag would see Dippel and Paxton battle for the green flag, with Gould taking a slide through the frontstretch grass on the second lap. Oosterholt moved into third on Lap 3 ahead of Tolton and Whyte, with the first caution flying a lap later for Vandebelt catching air on the backstretch off of the nose of Greenfield.

Paxton would grab the lead on the restart ahead of Oosterholt and Tolton, as Whyte battled Dippel for fourth ahead of Craig Kamrath. Whyte got the spot, with Kamrath next to challenge. After Kamrath cleared him for the position, Dippel would rearend the No. 51, causing significant damage.

The caution would then come out on Lap 10 for Dippel stopped in turn two. Dippel’s team was able to make repairs to get him back out on track, but Kamrath’s day was done. With 41 laps to go, Paxton led Oosterholt, Tolton, Whyte, Lavoie, Bos, Gould, Nelson, Sanders, Woodley, Andy Kamrath, Dunlop, Feeney, Thompson, and Kenny.

Oosterholt would get a good restart to take over the top spot ahead of Paxton and Tolton, with Brooks spinning Phinnemore in turn four on Lap 12. Phinnemore was able to get back going without a yellow flag.

The race’s third caution came out on Lap 17 for Paxton stopping in turn two with a broken tierod, as Thompson went for a spin on the frontstretch. Under the caution, Kamrath gave up the sixth spot to come down pit road to the attention of his crew.

Oosterholt got a good restart to keep the lead ahead of Tolton, Gould, and Whyte as Kamrath came back down pit road, done for the event with fuel pick-up issues. Lavoie ran fifth ahead of Sanders, Woodley, Bos, Dunlop and DiBello, with Feeney down pit road on Lap 21 with mechanical issues.

Dippel worked his way back up to 11th by Lap 22, with Brooks and Kenny side-by-side for 12th. Kenny got the spot a lap later ahead of Brooks and Watchorn, with Baker down pit road on Lap 24 with a mechanical issue. 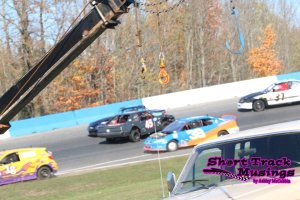 As Dippel looked to continue his charge back through the field, he would make contact with DiBello, sending him around off of turn two in the midst of traffic. The caution would then come out a lap after the contact (Lap 27) for DiBello stopped on the backstretch. Ultimately, that’d mark the end of the feature for both DiBello and Kenny. Meanwhile, Dippel was able to keep his 10th position.

Oosterholt got another good restart ahead of Tolton, Gould, Whyte, Lavoie, Woodley, Sanders, Dunlop, Dippel, Bos, Brooks, Nelson, Watchorn and Thompson, with Wakeling and Feeney side-by-side ahead of McKibbon. Dippel would then get alongside Dunlop for seventh, completing the pass before the caution came out on Lap 35 for Demers rolling to a stop.

Oosterholt locked down another good restart with Gould moving up into second ahead of Tolton, Whyte, Lavoie, Sanders, Dippel, Woodley and Dunlop, as Wakeling came down pit road with a mechanical issue on Lap 38.

Brooks ran 10th ahead of Sanders and Bos, with Sanders getting alongside Brooks for the position on Lap 40. Sanders would take the top spot, bringing Bos through with him to bump Brooks back to 12th ahead of Watchorn and Thompson. Bos would then challenge Sanderse for the 10th spot with five laps to go.

The race would not end without a yellow flag, as Lavoie would make significant contact with the wall courtesy of contact with Sanders. Sanders would be given the black flag as a result.