MILGROVE, Ontario — It was a tale of two tapes on Sunday at Flamboro Speedway as a pair of drivers were celebrating in victory lane following the final round of the Grisdale Triple Crown Championship. 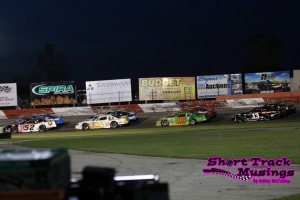 Tyler Di Venanzo qualified 11th, followed by Lane Zardo, Shawn McGlynn, Carson Nagy, Trevor Monaghan, Chad Corcoran, Mike Westwood, David Gallinger, Mike Klotz, and Chris Howse. Chenoweth would drop to the rear of the field as he was the highest qualifier to accept the $3,000 to win challenge for giving up his starting spot.

The start of the event would not go smoothly, with the caution coming out on the opening lap for Westwood going around on the front stretch. The second attempt would not go any cleaner, with the yellow flag flying on Lap 2 for an incident involving Monaghan, Gallinger, Howse, and Zardo in turns three and four. 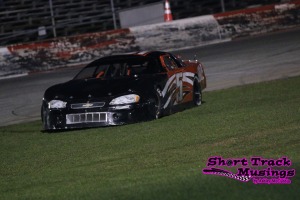 The third attempt went smoothly with Gilbert taking over the top spot ahead of Sheridan, Gemmell, Fitzpatrick, Rick Burbridge, Maginnis and Schwartzenburg, as Kevin Albers and Mark Burbridge battled for eighth. Albers got the spot on Lap 5 ahead of Burbridge, McGlynn, Corcoran, Chenoweth, and Zardo.

Chenoweth would give Corcoran the bump and run on Lap 7, enabling him to take over the 11th position a lap later. Corcoran now ran 12th ahead of Zardo, Di Venanzo, Nagy and Howse, as Westwood went for another spin. With Westwood spinning into the backstretch grass out of harm’s way, there would be no yellow flag waved.

Nagy would then get by Di Venanzo for 14th on Lap 10, with Howse looking to follow him through, but the third caution came out instead on Lap 12 for Sheridan spinning on the frontstretch.

Gilbert got a good restart to keep the top spot ahead of Fitzpatrick, Maginnis, Gemmell, Rick Burbridge, Albers, Chenoweth and Schwartzenburg, as McGlynn and Mark Burbridge ran side-by-side for ninth ahead of Corcoran.

Albers would then get alongside Rick Burbridge for fifth on Lap 16, completing the pass a lap later, bringing Chenoweth and Schwartzenburg through with him. Rick Burbridge now ran eighth ahead of McGlynn, Corcoran, Nagy, Sheridan, and Mark Burbridge.

The race would continue to get interesting, as Nagy would get sideways off of turn two on Lap 27, but managed to hang onto the car. Then on Lap 29, Chenoweth would tag the back of Albers, enabling him to move up into fifth, as Schwartzenburg continued to run seventh. Meanwhile, Rick Burbridge headed off the track pit side on Lap 30.

The battle for the lead got interesting on Lap 31, as the leaders weaved their way through traffic. They would come up on Monaghan and Scott Entwhistle battling side-by-side, allowing Maginnis to get alongside Gilbert for the top spot. Entwhistle would then get loose off of turn two with the pressure on him, going around for the spin and the race’s fourth caution.

The restart would see McGlynn and Albers make contact, but keep going as Maginnis went around Gilbert for the top spot. The fifth caution then came out a lap later for Albers rolling to a stop.

Maginnis got a good restart to take over the lead as Chenoweth moved up into second ahead of Maginnis, Fitzpatrick, Schwartzenburg, Gilbert, McGlynn, Sheridan, Mark Burbridge, Corcoran, Howse, and Zardo. Sheridan would then get by McGlynn for seventh on Lap 39, with McGlynn spinning through turns one and two laps later courtesy of Corcoran for the sixth caution.

Maginnis got another good restart as Gemmell moved back into second ahead of Chenoweth, Schwartzenburg, Sheridan, Fitzpatrick, Gilbert, Howse, Burbridge, Klotz, Monaghan, McGlynn, Nagy, Corcoran, and Zardo. The seventh caution then came out on Lap 48 for Burbridge spinning Howse in turns three and four.

The eighth caution would come out on the restart courtesy of a jump by Maginnis. The second attempt went cleanly at the front of the field, but featured contact mid-pack as both McGlynn and Burbridge slid through the grass.

With the cars out of harm’s way and back going, there’d be no yellow flag as Maginnis led ahead of Gemmell, Chenoweth, Sheridan, Schwartzenburg, Fitzpatirck, Gilbert, Nagy, Monaghan, Zardo, Howse, Corcoran, Klotz, and McGlynn. Corcoran would then get alongside Howse for 11th on Lap 56, completing the pass a lap later. Zardo would challenge Monaghan for ninth, but was unable to complete the pass.

At the front of the field, the leaders would make contact on Lap 64 with Gemmell sliding a little sideways off of turn two, but he’d gather up and be right back on Maginnis’ bumper within a couple laps for the top spot.

Maginnis would find his way through lap traffic, holding the advantage. Things got close when they came up on Zardo, with Maginnis spinning Zardo down the backstretch. With Zardo spinning into the backstretch infield and out of harm’s way, there’d be no caution flown.

Shae Gemmell would be crowned the 2019 Grisdale Triple Crown Champion, scoring the title by five points over J.R. Fitzpatrick. Billy Schwartzenburg wound up in the third spot ahead of Jake Sheridan and Chad Corcoran, with the No. 89c of Andy Kamrath & Shawn Chenoweth in sixth. Rick Burbridge placed seventh, ahead of Mark Burbridge, Carson Nagy, and Jake Gilbert.